# I never used to be much of a "dark mode" aficionado but, as more apps introduce black themes for the iPhone X, I think I'm becoming a convert.

@colinwalker I like them even on the 7. I mean, it’s jet black on the back, so why not on the front, too?

@colinwalker I agree. I don’t have the X, but as the black themes roll out, I’m switching.

@colinwalker me too. I still don’t love dark mode on my iPads though. It really is the OLED screen.

@craigmcclellan Same for me. The depth of the black on the iPhone X just makes text ‘pop’ almost like it’s floating.

@colinwalker Oh, interesting. I’ve actively avoided dark mode because I love the brightness that comes with light, white interfaces, but I don’t have an iPhone X — I’m intrigued to see what the black looks like on that OLED screen.

@colinwalker I have always preferred dark themes in every app I use. So pretty excited to see how how it would look on a pitch blacks of OLED. I guess even app developers are modifying their dark themes to be full black rather than grey. Seeing more such notes in updates.

@colinwalker Wish I had an X; I’ve been using dark mode ever since devs started providing the option. I fondly remember @marco’s novel initial implementation of auto-dark mode in Instapaper on my original iPod Touch, which was tied to sunset time by the user’s local area.

@schuth @amit It’s especially effective at night. When it’s pitch black in bed it’s a bit surreal how it looks with no light leakage across the screen.

@colinwalker It works well for me on the iPhone 7 and iPad Pro as well. I’ve done it for each app that supports it.

@colinwalker interesting, I do wonder though what’s different with Apple’s ecosystem? Apple’s implementation of OLED or the app developers willingness to embrace the black?Or possibly both or neither ?

# I had a call with Occupational Health last Friday and, over the past few days, it's been finalised that I'll be returning to work next Monday (12th) exactly five months to the day I went off sick.

I'm going to have a four week phased reintroduction starting on 50% of my normal hours and doing some administrative duties to begin with that don't require me to talk much.

While it's good that this frustrating period is coming to an end, I have to admit to being nervous about it.

Now that I have a date and plan I think an underlying sense of dread has started to pervade my subconscious. Things will have changed, the team dynamic will have altered and it's going to be hard to reintegrate.

Maybe it's something more than just nerves. Maybe there's something deeper, but I can't allow myself to think about that for now.

I've gotten used to being home, to not commuting, to having control over my day. Returning will be a massive shock to the system beyond the physical aspect which the reduced hours are meant to allow for.

Because I'm aware of this, I know I need to maintain at least some vestige of routine from my time off. I intend to use my commute productively and write. Or read. Or study. Or meditate.

Writing is who I am and what I do. Even if it's nothing more than a blog post, I'm happiest when I'm putting words on a page, real or digital.

But I've been allowing these nerves over my impending return to affect my current activities, allowing my daily practices to become inconsistent.

I only have a few days left so need to make the most of them, just as I need to carry things forward into my life that, once again, will include work.

@colinwalker Your trepidation is understandable. I hope your reintegration at work’s as smooth as possible, but I can see how it’s uncharted water after substantial time away. Selfishly, I’ll be glad for your perspective on maintaining meditation & writing practices.

@schuth Thanks. I think maintaining the practices will be essential to easing the transition.

Oh, and trepidation is such a good word, isn’t it? 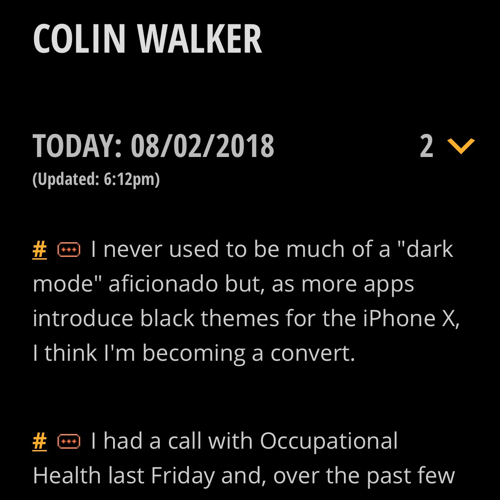 I just need to find the best way to handle it for the current session.

@colinwalker pretty sure that @pat has something implemented on his site for a dark mode.

@colinwalker Have a look at my site’s GitHub repo. I’m setting the theme based on the time, then using sessionStorage to store which theme the user wants displayed.

@colinwalker Dark modes really don’t agree with my eyes. I get afterimages after a short while.

@pat Thanks. I was having a look at your source ;) Looks like it might be simpler than using a PHP session variable + jquery.