Signal to noise on the social web. 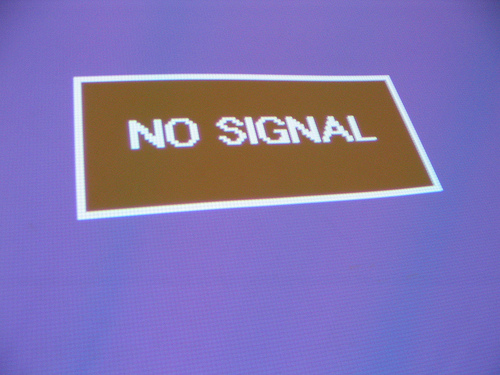 There are some discussions that just don't go away and one in particular is that around fragmented conversations. The main catalyst for keeping this conversation alive is FriendFeed and the effect it is having on commenting. This has been getting peoples backs up for a while and recent events are just adding to it.

The conversation has taken an additional twist as it has been drawn in with the one about the noise to signal ratio on social sites and services. A post on Mashable asked "Does FriendFeed enrich the conversation or add to the noise?". Corvida at SheGeeks responded with an emphatic "Don't Be So Naive: Friendfeed Adds to the Noise" but the truth is that is does both.

It has been suggested that Web 3.0 should be about filtering the streams and reducing the noise and that aggregation services such as FriendFeed should implement more controls to allow the user to do this. Hutch Carpenter over at I'm Not Actually A Geek likened our individual data streams to TV channels and suggested that the first step to controlling the noise is to choose your channels wisely but he also defends the noise.

One mans meat is another mans poison

What is noise to some is interesting to others and must never be discounted out of hand - filtered yes, but not discounted. Robert Scoble is the biggest noise advocate out there, not because he enjoys reading idle chat but because the noise stream will contain the odd nugget - just like panning for gold. He argues that only those willing to sift through the dirt will strike it rich and those covering only the same old sources will only ever skim the surface. He maintains that the traditional news sites are often unwilling to run something from a relative unknown as "You have to convince multiple people who control these sites that your stuff is important" - easier said than done.

And this is where the likes of Twitter and FriendFeed come in.

Despite their obvious facility aggregation services are, however, causing a new problem - duplication. Not just the duplication of content but also duplication of the discussion and this, it is argued, is just compounding the noise problem.

Take for example my recent post "A static FriendFeed is a worthless FriendFeed". As well as the listing from my RSS feed this post was referenced in the following ways on FriendFeed:

That's 8 separate conversations on FriendFeed alone about one single blog post and don't forget the actual comments on the blog itself. While it is good for any conversation to have as much exposure as possible it is hard to track the threads.

The post achieved it's aim to get people talking but not necessarily about the point in question. It did, however, identify a real need for services like FriendFeed to look at how data is presented or to allow the user additional control.

I have added a search link to each post to show all the instances of a conversation on FriendFeed about my posts but people are calling for ways to combine entries. If someone has already shared an item via Google Reader why isn't this tracked so that any subsequent shares are entered as 'likes' rather than new entries in the stream? Why can't different sources refer back to the same item?

FriendFeed currently supports 35 services and looking through these there are potentially 16 ways (including disqus comments) that a blog post could be referenced on FriendFeed, be it via RSS, Digg, Mixx, Google Reader etc. If you then consider that numerous users could carry out each of those activities in relation to the same post then the true potential for duplication becomes clear and is frightening.

I've always maintained that I don't care where a conversation takes place as long as I can gather the strands and weave them together to get a full picture but gathering this many strands will become an increasingly harder job and it is therefore easy to see why bloggers are becoming frustrated.

Duncan Riley has taken the whole issue one stage further in his post "Blogging 2.0: It’s All About The User" He takes the current arguements over whether services such as FriendFeed are in the interests of the creator and likens them to the debate about whether bloggers should publish full or partial RSS feeds - a full feed benefits the consumer but a partial feed attempts to drive traffic to the site in order to benefit the blogger.

Now, we all know that partial RSS feeds tend to act as a turn off to consumers, instead of driving traffic to the source it is more likely that people will unsubscribe as they don't have the time or desire to follow links back to blogs just to read a story - instant fail. The chances are that the same thing will occur with bloggers who try to control the conversation.

Duncan has it spot on but at present the options available to bloggers just don't quite give them what they need. We have plugins and services to gather the threads of the conversation (Glenn Slaven's FriendFeed Comment plugin for WordPress, YackTrack etc.) but they are reliant on the APIs of those services that hold the threads.

Louis Gray breaks this down further when he says that the blogging world has changed and we as bloggers have to change with it. he points out the various ways that he has embraced the social web as a place to hold conversations and highlights that some bloggers are now reporting that FriendFeed is high on their list of referring sites - it is in also my top four.

Just as bloggers have had to relinquish control when it came to publishing full RSS feeds they must also relinquish the control over the subsequent conversation but, if history is anything to go by, this will have a positive impact on the blogging experience. Those who fully immerse themselves in the conversation regardless of where it lies are going to be those that are recognised by the community at large. Those who are participating in all avenues will be the ones to watch and this will drive additional 'friending' on social sites and extra subscriptions to RSS feeds.

Engaging in the conversation and being willing to takes those steps necessary will enhance the reputation of any blogger willing to put themselves out there which in turn lead to the secondary benefits we all go on about.

[...] year 2018 and he says, “On FriendFeed, We’re All TV Channels.” Colin Walker is hovering his finger over different possibilities and trying to pinpoint exactly what all this means. Steven Hodson [...]

I actually seem some potential for improvement if people could embrace FriendFeed as the "master" commenting system, but it would require everyone to use FriendFeed.

Thanks for identifying the name of the FF Wordpress plugin.

Colin - Nice post of a meme that seems to be occurring out there. You're almost providing a real-time, "as it happens", description of things. When the likes of Scoble and Duncan Riley get comfortable with this whole notion of engagement occurring anywhere, I think we're seeing a change in the blogosphere.

It's easy for me to like distribution of content and conversations all over the place. I'm a small-time newbie just hustling out there. But when the big established guys are talking about it, that's something.

Hutch, interesting point but maybe not entirely there. The likes of Scoble and Duncan have huge reputations that preceed them and can therefore easily adapt to any developments as they know people will follow them wherever they go. Just look at the effect of Scoble championing FriendFeed.

I actually feel that the small guy will have a harder time adapting unless they just jump right in and establish themselves from the beginning. A smaller brand will become more dilute across a range of services unless it is handled correctly.

I also think bloggers shouldn't be worried about FriendFeed or similar applications. FriendFeed is only making the various ways a story is shared on the web visible to everyone. It's not a new phenomenon. Maybe the whole conversation won't take place in the comments of blogs anymore but thanks to FriendFeed I have discovered some new blogs which I have subscribed to. In the end it will benefit bloggers.

The reach of social media is growing ever wider and this is evident in the direction that software and services are taking. The Adobe Photoshop Express beta, for example, has been updated but the only 'functional' change advertised is that you can now perform a 'Save As' in order to preserve your original image.

No, the real news here is that Adobe are hooking in to the desire to go social. It seems that we are no longer happy with software or services that just do X - we demand more and we are increasingly demanding a social aspect.

The new features announced are as follows:

What's intersting with the widget is the choice of examples given by Adobe where you would like to display your pictures; they could have mentioned anything but instead refer to "Facebook, MySpace, and other sites where your audience awaits". Adobe are obviously trying to cash in on the social movement. How long before we get a Photoshop Express Freemium option? Once you're hooked in to editing your images online will we get a version which charges you for key functionality post beta? Only time will tell.

Photoshop Express is an ideal target for a social application but I think we should all be concerned if many other applications try to force a social element upon us where it just doesn't fit to do so.

Adobe is playing catch-up. Their crappy terms of service are still keeping folks away, and they're trying to get into a market which is already fairly well-established. Flickr integration was a do-or-die maneuver. They might manage to get a bit of market share amongst folks who want to make some basic quick edits, but any serious hobbyist or professional is going to continue to use offline image editing software.