Social media and the dream of going mainstream. 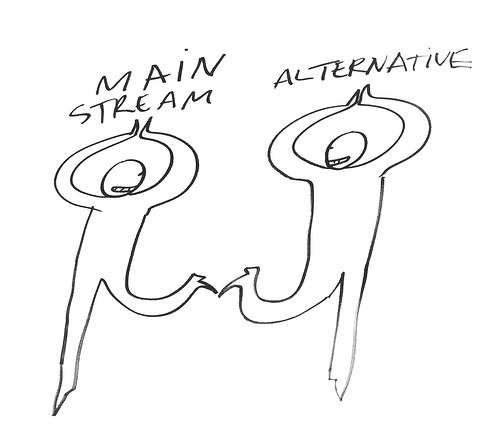 The blogosphere came alive yesterday after Kara Swisher's post "Twitter: Where Nobody Knows Your Name" in which she recounted that of a survey of 100 people attending a wedding everyone knew about Facebook (even half of them accounts) but no-one knew of Twitter, FriendFeed or other similar services. In all truth, this is not surprising.

As I wrote yesterday, just because someone uses a social media/networking service such as Facebook it doesn't automatically make them a social media user - that is, it doesn't mean they actually know what social media is or want to go looking for other services.

If this knowledge gap exists amongst those who use social networking services how are we then supposed to get those people on board who aren't even that far along the web 2.0 road? There is a much larger percentage of the population who spend next to no time online and may only use a computer to check their emails and visit the odd website - the TV generation.

Clay Shirky proposed that the vast number of hours spent watching television could be used to far greater effect and would have a huge impact on 'media' if those consumers became content producers instead of wasting away in front of the small screen. I agree with Frederic at The Last Podcast, however, that those consumers would not want to become producers; the reason they sit back and watch so much TV is due to apathy - they simply cannot be bothered to do anything that requires more effort.

This apathy extends right across the board so expecting the general populace to become involved in new media avenues is wishful thinking.

Social media may well go mainstream eventually but it will be by stealth rather than a concerted push for adoption. As business picks up on ways to effectively utilise social media to increase their outreach consumers will begin to use these tools by default but it will take a long time. As the concept slowly seeps into the fabric of our lives it is our job to cajole and encourage where we can in order to help people realise how this 'new' form of communication is beneficial.

It is not about individual applications or services going mainstream but more the idea and facility of social media and social networking. Much is said of the success of Facebook, YouTube and MySpace as examples of 'new media' achieving success but this is because they fulfil a function or because of the status attached to them at a specific time - the cool factor as described by Steven Hodson. Even so, the total usage they have achieved is but a drop in the global ocean. Despite the growth of these sites ask the average account holder if they use any social media/social networking services and you are likely to get a blank stare - they don't understand the full implications of what there are using.

The chances are that the current applications on offer won't be the ones going mainstream; it will be next generation of services that take off after piggy-backing on the likes of Twitter etc. to gain popularity - it is the natural evolution of an organic industry. Eventually, something comes along at the right time and has the right spin just like MySpace and Facebook did.

As Alexander van Elsas states at his blog the whole web 2.0 space is awash with clones, variations on a theme and mashups which pull these services together. Innovation has slowed and it is difficult to see where the next big thing will come from. While the numerous services are fighting for our attention it is hard to envision anything going mainstream. This is why I believe social media will sneak in via the back door as consumers start to use whatever they are given by the service providers they currently hold contracts with, or those companies whose products they already use.

This is how social media ubiquity will be achieved whether we like it or not, and no matter how precious we get over our favourite startup or service.

How do you see the current social media sphere developing? Is there any way that we can actively promote adoption or will it just be a case of waiting?

Well, adoption can't be forced as most people will run away from that. Waiting will only get social media so far as well. I think that Yahoo Buzz will eventually turn some people onto social media. It has the Yahoo brand behind it and the Yahoo traffic.

If that doesn't work, then we are looking at some sort of paradigm shift or major innovative service to really shake things up. For a while I thought Twitter (and services like it) would be the big hit, but the fact that all conversations are public makes it somewhat problematic. IM owns that space, and twitter has not innovated enough there to really change that.

The paradigm shift will be the use of social media by big business as a point of entry and then the subsequent use by their customers - it's just that people won't know it as social media.

There are times that I think that someday we'll all be thanking Guy Kawasaki for creating Alltop because it will bring new eyes to blogs. That is something else that could bring all of this into the mainstream.

Another valid point, of course, is that not only are some people not interested in communicating or creating, they also don't have the time.