Writing in the social era

"how does the broadcast-this-now proposition of the internet shape the act of writing itself?"

In other words, what is the difference between posting and writing? He posits that the first is done when seeking an audience, the latter for an existing audience, one that has "already made some intentional decision to interact with you and your ideas." Two distinct propositions with differing intentionalities.

In the comments, Abhishek Mukherjee suggests that longevity plays a part, that the recent phenomenon of posting is more disposable, that utterances made in this mould are not intended to hold the attention long term - throwaway acts (as I have complained about on more than one occasion.)

Writing, therefore, is more considered as it is intended the audience will consume it over a longer period, possibly repeatedly.

Others comment that the audience doesn't come into play until after something is published, author intent is all. But can one really be separated from the other? Can we really isolate our thoughts and ideas in this way?

James' question is a public versus public framing but I think there is something deeper to consider: whether we post or write, or do neither, is the result of various forces and it is the interplay between them that determines our actions.

What makes us move from thought to act, from pen and paper or private digital journals to the web? What makes us want to hit publish?

Is it a surety in our thoughts and our words, an arrogance that leads us to share them with the world? Or is it the opposite, an uncertainty that requires confirmation?

Knowing our own mind is an internal, personal act but, being so closely linked to our perception of who we are, does it become a projection of ourselves. Is there a desire to be seen, to be known, to be acknowledged? A cry of "this is me" and the only way we know how to do that, the only way that is readily accessible, is to publish that cry to the web and hope someone hears.

For those who claim to write solely for themselves to hit publish, moving from the private to public sphere, has to be something so fundamental to who they are, something incredibly individual - otherwise why post publicly at all? What would be the point?

It could be quite animalistic, instinctual and deep-seated or possibly the result of a higher function - maybe to be seen as intelligent, as worthy.

Perhaps there could be a need for accountability. Moving oneself to the public sphere in order to be seen, or at least have the potential to be seen, can drive purpose and creativity while having others to call you out if you don’t match expectations.

If we consider the Observer Effect (the theory that observing something in some way changes it) does the potential presence of an audience change what we do, how we do it and how we behave? Surely it has to.

Are we the willing creators of our own panopticons?

Has the web, and social media in particular, changed us? Has the like of reality TV caused a cultural shift where we all look to be public figures and inhabit a domain previously denied us?

Longevity plays a part, as Abhishek rightly suggests, but I think James' premise that the nature of the audience, and the depth of connection to it, determines how much of ourselves we are willing to invest.

Once you get past the opening salvoes, past the "getting to know you" stage, it becomes a conversation, a relationship, a meeting of minds. Is this part of what drives us to first hit publish?

The relationship between writer and reader has historically been a strange, asynchronous affair. Writing and publishing were restricted to "the few" who wrote books or articles or columns which everyone would read but had no way to respond.

There was no real relationship, it was more reader loyalty than anything. In the social age, however, a relationship can form as the audience often has the ability to engage with the writer.

But it goes beyond that - for the first time everyone can publish, everyone can be the writer. The lines are now blurred and we are both writer and audience simultaneously, and I think this has a significant impact on how we think, on how we write, even if we don't realise it. Most are so used to being the audience, knowing what they like and expect from the writer, that it can't not colour the things they create.

As the roles shift, as we become more writer than audience - perhaps with an audience of our own - so the investment in our work and in the relationship increases. The more we stand to gain the more we are willing to give of ourselves and the more our writing will change.

"How do we separate the performer from the performance? What is the dance without the dancer? What are words without the writer? How are thoughts distinct from the thinker? What is beauty without a beholder? We do not share our photos, dances, and blog posts as disembodied, discreet objects: we share them to share ourselves. We press ‘publish’ to inform the way others think, and I purpose this act is indistinguishable from seeking to inform the way others feel about us as individuals. It does not make sense to separate the act of publishing from the desire to engage other people."

James offers a wonderfully eloquent response to my question about why we hit publish and move from private to public.

In thinking about ways that the internet is changing writing, Colin Walker asks: what exactly happens in a person’s mind when they push the ‘publish now’ button? Why make one’s words public? Writing privately, as a way of life, might be a means of self-development. Maintaining a personal archive of thoughts for future reference is a way to grow and hone my understanding. But why am I posting this text publicly, for all the world to see? (Hold on: this is about to get real meta. Only continue if you are ready to ingest yet another blog post in the overly saturated genre of writing about blog posts!) The reason I made this text public, so far as I can reckon, has something to do with you, the reader. These words are here — and not in a private journal or encrypted file — because I want to share them with you. If this were text intended for my purposes alone, it wouldn’t be here. And there are untold rough drafts and iterations of these paragraphs that I am inclined to keep private. I think we must acknowledge the performative, ‘recipient-oriented’ dynamic of any public action. As Maria Luisa commented earlier: a dancer who says, ‘I don’t care what the audience thinks of my performance’ seems to be making an incoherent statement. Why perform in front of an audience at all if audiences are nothing more than fake brain ornaments, propped up in rows of chairs like mannequins? If the thoughts of audiences are categorically void of all meaning, why bother climbing on to a stage at all? To me, this is why the grand declaration of selfie culture — “This is my identity, and I don’t care what you think of me!” — boils down to a non sequitur. “I don’t care what you think of me” dissolves into a self-contradictory statement. As humans who have opinions, it seems nonsensical to act under the pretence that the opinions others do not matter. I made this text public because I want your attention. Like a performer preparing for opening night, I have spent time in private orchestrating these words into a (hopefully) coherent structure. And, like a photographer who has toiled with light, I now present my creation to you. The culminating question of our inquiry is, therefore: now that I have your attention, what do I want you to think or do? This question might not only be applied to this blog post, but to every public presentation. Why post a picture of my dinner? Why share a status update that places me at a specific event or with particular people? What am I hoping that you will think or do as a result of me posting a picture of the skyline on my way to work? How do we separate the performer from the performance? What is the dance without the dancer? What are words without the writer? How are thoughts distinct from the thinker? What is beauty without a beholder? We do not share our photos, dances, and blog posts as disembodied, discreet objects: we share them to share ourselves. We press ‘publish’ to inform the way others think, and I purpose this act is indistinguishable from seeking to inform the way others feel about us as individuals. It does not make sense to separate the act of publishing from the desire to engage other people. (There is a much longer discussion to be had here about individualism, the renaissance, and whether the reliefs Pharaohs and self-commissioned oil paintings of nobility count as ‘selfies,’ but I digress.) A creator might envision limited directionality (I post, you ‘like’) or a multidirectional interaction (here’s my book to contribute to the discussion in a particular field, and thus an invitation for others to debate or refute my ideas), but in either case the project sets out to intersect the attention of others. ‘Publish now’ presumes that human brains could or should connect or influence one another in some way. In follow up to my earlier Writing versus Posting? article, David Ashworth speculates that “posting is about me and the space I live in” and therefore amounts to a diary that one intends to be read by others. A monologue for an audience, as it were. (I like the theatrical description of a soliloquy here.) On the other hand, “writing [in contrast to ‘posting’] is about us and the space between us.” Writing sets the stage and invites dialogue, which is distinctive from broadcasting the personal details of one’s life for an audience that may or may not be listening. One activity tends toward fishing for validation, and the other tends toward courting variant perspectives. (Corporate social media has excelled in incentivizing the former largely at the expense of the latter.) At the bottom line, my motivation for publishing this blog post and another person’s reason for sharing a selfie with their breakfast cereal is the same: we are both looking for engagement. It is the same reason dancers perform, and painters exhibit their work. The kernel of difference between our publications and presentations rests in the kind of interaction we hope to galvanize or inspire in others. The distinctive ways we frame these ‘terms of engagement’ in our public activities reflects something about how we define value versus minutiae. So, what do you think? Does pressing ‘publish now’ boil down to a desire to engage with others?

# I changed my permalink structure at the end of last year and was using a plugin to perform the redirection. All was good, even after the migration.

For some reason (seemingly no reason) the site decided that any 301 attempt from the old permalink structure would result in a redirect loop, using 100% server resources and slowing the site to a crawl. 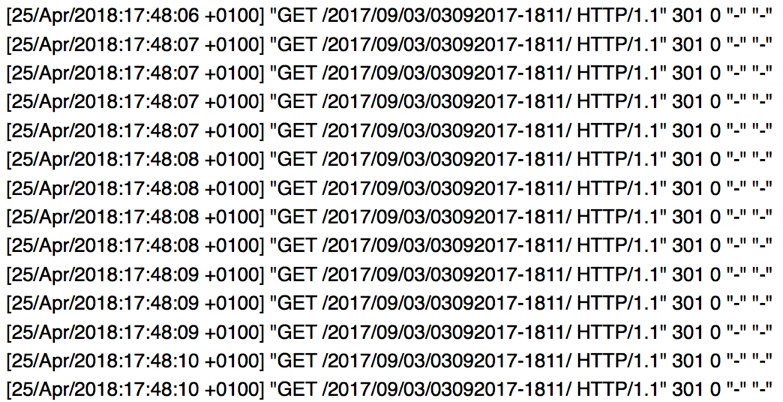 I removed the plugin and tried another - same problem.

Next, I tried the following redirect in .htaccess with no luck:

I'm at a loss for what's causing it so any suggestions would be extremely welcome.