# My wife was going to migrate the blog to the new host today but it's a big day and there's a post I want to get out later so didn't want to risk any issues when that time comes. The move will, therefore, likely happen tonight or tomorrow.
#

Liked: Wrapping My Head Around Micro.blog and IndieWeb – JSON Writes...

Even the IndieWeb website doesn’t do a great job of explaining what it is, or what it means to “join the IndieWeb”. As far as I can tell, it’s a collection of practices and technologies that connects independent blog-type websites together into a quasi social network.

In discussing micro.blog and the #indieweb, Jason makes a valid point which others, and myself, have echoed. Social networks are so ingrained, so easy and so obvious that people don't need to think about them. It's by design, of course - make them sticky, make them frictionless.

To have to put real effort into what you are doing and actually adopt a philosophy for how you engage on the web is further than many are willing to go without having a real sense of why they should or what benefits they might gain from it.

As much as the technology needs to be easy to use the rationale is, perhaps, more important.

I've mentioned the Drafts app on the blog at least semi-regularly for the past couple of years. The majority of posts since have at least begun within the app, if not been completed or, more recently, posted from it directly.

I first used Drafts 2 on the iPhone 4S before switching to Android on the Nexus 5 for a couple of years. On my return to iOS Drafts (then updated to version 4) was the first app to be installed.

Today, the latest version - Drafts 5 - is out of beta and available on the App Store. So what is it?

"Drafts is a quick capture note taking app for iPhone, iPad and Apple Watch. Drafts launches ready to type, making it quick and easy to capture thoughts, status updates or anything else on the go. After capture, Drafts provides a powerful array of highly customizable “actions” to send text to email, messages, events, Dropbox, Evernote, social media, other apps – making it an indispensible tool for anyone trying to be productive on iOS."

That description was probably sufficient for earlier versions but this release takes things to a whole new level as this guide to what's new illustrates.

Even that, however, doesn't go far enough. To understand the power of the built in scripting engine (you can create incredibly complex custom "actions" using JavaScript which allow you to process text, connect with other apps and even web services) has to be used to be appreciated. It's utility and capability is extraordinary.

I sorely underused previous versions and, I'll be honest, it took me a little while to get used to the new look and feel of Drafts 5 - I guess I'm just a creature of habit. However, once the new UI started to evolve and mature (and I decided I had to stop being stubborn and switch solely to the new version) I have really taken Drafts 5 to heart. It took over to the point where I stopped using, and unsubscribed from, my previously coveted Ulysses. I just didn't need it.

Compared to some I will still be exploring only a fraction of Drafts' possibilities but I can do much more than I ever thought possible.

It forced me to reacquaint myself with JavaScript which is a good thing, I hadn't really touched it since the early DHTML days, but there's no need to unless you want to create your own scripted actions. There are predefined actions which give great utility out of the virtual box.

Drafts can be as simple or complex as you make or need it. It's not that the app has specific, set functionality but that it enables you to give it the functionality that you require. Every installation becomes as unique as the person using it.

Greg Pierce (Mr Agile Tortoise himself) and beta testers have created a range of actions to connect Drafts to a plethora of productivity apps, many of which are available to install from the Action Directory. That I was able to create a script which posts directly to my WordPress blog via HTTP requests attests to how versatile and powerful it can be. Who needs Workflow! (For text.)

The new "Workspaces" feature allows you to set up filters or views to divide your drafts into self-contained sections or projects - I am writing my "book" exclusively within Drafts so it's not just for notes anymore and "where text starts" is now woefully inadequate.

I didn't want to write a review as there are those who can do it much better than I could (see the links below) so, instead, take this as a very strongly worded recommendation. If you do any kind of text processing on your iOS devices, especially if you find yourself moving text between apps, then Drafts could be for you. There's even a generously featured free tier so what have you got to lose.

For full reviews to discover the true power of Drafts 5 check out the following:

(Note: while the app is free certain features mentioned above, like creating actions and Workspaces, require a pro subscription.)

# Started working on a rudimentary "On this day" feature but don't know if or how I want to implement it. 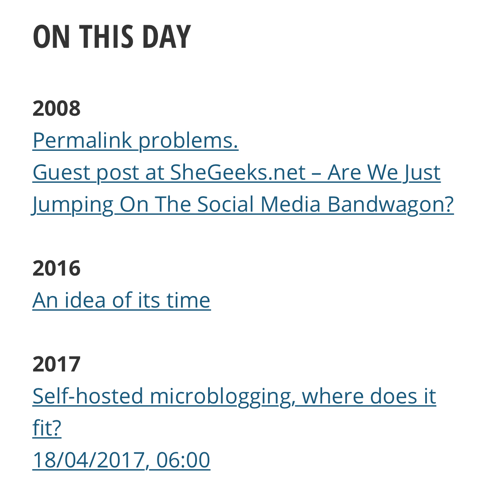 @colinwalker I've truly enjoyed my "On this Day" feature! I have my website automatically push the content to my reader application on a daily basis. Such a fun reminder of my memories.

Thanks. I like it as an idea and as a way to surface old thoughts but equally don’t want it to clutter things.

It was your Clevercast episode about ridding yourself of Facebook that got me thinking about it (I’m going to do a proper write-up and credit you) but there didn’t seem to be any plugins out there so I thought I’d try putting something together.