The beauty of micro.blog

In the latest episode of the Core Int podcast Manton re-emphasised that micro.blog is a blogging platform rather than a social network.

It's flexibility, however, means it can be different things to different people.

For me, rather than being a blogging platform, it has become an extension of my blog almost like a comment engine. The webmention support means that the conversations around my posts get fed straight back.

Because I don't take advantage of micro.blog's hosting it is definitely more a social environment for me and, because of this, I see how it starts to achieve one of Manton's goals: to act as a layer tying the blogosphere together.

If we go back to Tantek's reasoning for why social networks took over (a combined reading and posting interface) we also see the true depths of the service.

It looks like a basic Twitter-style network but that is only scratching the surface; its simplicity belies its power.

At its core is a feed reader presenting posts in the usual reverse chronological order but, although it feels like you are following users on a social network you are actually subscribing to their blogs - and not just microblogs depending on what feeds they include.

The social element allows us to reply to posts in situ but these aren't simply replies, they are also comments which, as mentioned above, can automatically co-exist on externally hosted blogs.

And then you can use exactly the same interface to post to your own blog, be it natively hosted by micro.blog (a massive part of the offering) or external, or any other tool that supports the APIs used.

While a degree of web plumbing can be used to back feed posts from social networks to our own sites, micro.blog does all this natively - and that is the beauty of it.

There is a lot going on behind the deceptively simple façade.

@manton I hope this does it justice.

@manton No, thank YOU

Blogging is a particularly singular and personal act despite your posts being publicly available - the unedited voice of a person and all that. Reading and commenting on blog posts, however, is an inherently social act carried out on a range of scales. Unfortunately, over the years, we have slipped towards the lower end of that range. Recent posts, discussion and approaches, however, are converging to give me renewed optimism that blogging can regain some of its status and power. Firstly, micro.blog is a force for blogging connectedness, as I keep saying. Next, there is Richard MacManus' intention to reinvigorate a blogging community. And then Dave Winer's idea to make blogging more like Facebook (but not a silo) and his first efforts with the technology behind "Instant Dave" look interesting. Then, of course, there is the indieweb movement which, as a whole, is built around the idea of interconnected personal sites. It feels that there is a concerted effort not to usurp the social networks (they are ideal for certain things which is why they're so popular) but to ensure that blog posts are in the places most suited. And not just that: to also get bloggers discovering and talking to each other again; to build a genuine dialogue rather than be isolated voices shouting into the abyss. It may seem like I am repeating myself (and you'd probably be right) but this is something I think deserves repeating. We have reached a point where a small number of outlets control the bulk of the web's communication, outlets that initially seem ideally suited to the task but operate according to their own rules and agendas. Outlets that control how information is presented, filtered and potentially removed. Without any real accountability. Medium tried to buck the trend attracting many influential people but their approach doesn't look sustainable, jumping between business models with no clear path. What Medium did achieve, however, was to bring blogging back from the wilderness and reintroduce it (as an important means of expression) to the online conversation, raising awareness within the "social generation" who never knew life before Facebook and Twitter. Never mind SnapChat and the multitude of messaging apps. It may have become disparagingly known as the place to rant about losing/quit your job but the ease with which celebrities, CEOs and presidents could share extended thoughts with the world cannot be understated. In fact, that ease needs to be replicated by other tools allowing casual or infrequent bloggers to publish as often or as little as they like without a heavy investment or learning curve. Just in a better environment. Those looking to do something about it may be coming from different directions with different approaches but their goals are as good as the same. The sands are shifting and I hope we can find a true oasis in the desert.

Liked Scripting News: The ideal blogging tool... Dave Winer has been on the campaign trail for better blogging software since, well, since blogging began and repeatedly said that blogging needs to be easier. Here again he states that the ideal tool would merge "the publishing of WordPress with the interactivity of Facebook." I've taken a lot of cues from Winer over the years for how my own site operates and have long agreed that social media became such a success because of the simplicity and immediacy of posting and replying within the same interface. These thoughts and the P2 WordPress theme inspired my simple posting form (which I'm using to write this) but I still wish that things were easier. As I've previously written, the beauty of micro.blog is that it is essentially what Winer is after: blogging via a social-esque interface. The difference is that it is hosted rather than something you can host on your own and "install as easily as an app on your iPhone." The pieces are all there just not put together in a package that anyone could use.

# I suddenly thought "what do I do about a day with no posts?" as this would break the previous/next day flow by getting redirected to the 404 page.

First up I had to account for the 404 appearing on a day archive and change the text accordingly.

The is_day() function doesn't work on the 404 page so an I needed an alternative way of determining this - running a check against the query is the simplest way:

Then I needed to update my footer so that the relevant previous/next links were displayed. Checking against the new $is_date_archive variable in addition to is_day() does the trick here.

But, what if the date is in the future?

A quick test to see if the archive date > today and I only display the "Today" link rather than previous/next.

# Liked: Webmention in action | Manton Reece...
# Thought I'd make a proper effort if someone were to somehow view a future date. 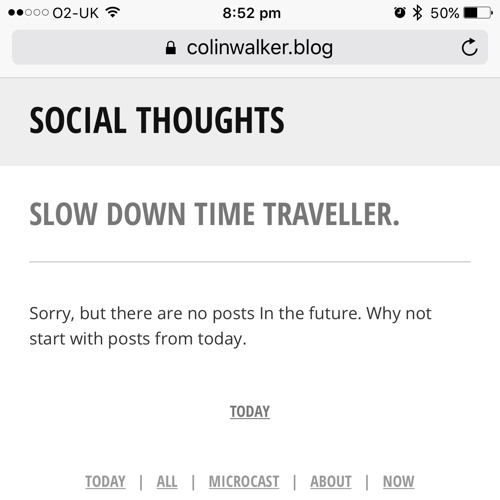