# Stuck for a topic for the next episode of Sonant Thoughts. What I was going to talk about has turned into a blog post, one I'm really looking forward to publishing.
# I don't know if it's just because I've been paying more attention to the #indieweb recently but striking out on your own definitely seems to be more popular lately.

Perhaps it's just a bit of observation bias where you see (or at least pay attention to) more of what you're focused on.

Bias or not, an increasing number of people are closing their accounts and leaving social networks but not the social web.

So, what's the difference?

What is social? It is interacting with others, engaging with them in some way, being part of something bigger than just yourself.

Forget about content silos for a moment, but "social networks" are still concentrated in a particular place. We may be able to interact with them in multiple ways and even POSSE our content back to them from outside via gateways and APIs, but the actual network is self-contained.

A network is comprised of nodes and edges (the connections between those nodes) and the activity graph is everything that happens across it.

A social network contains those nodes so, while we may map out our graph, it exists solely within their domain and is therefore owned by the network.

You may be able to export your data but you can't export your graph because the nodes and edges aren't transferable. Well, not without getting everyone to move all at once.

You can still be social without a social network - and by that I mean a centralised one owned by a company.

Of course, you need a social network; even if you only have one friend you still have a network - it is only small with just two nodes but it's still a network in a purely "connected items" sense.

Now, if we choose to map that network then we hold that map. My blog contains posts that are likes or replies while other posts contain links to other people. My directory page lists incoming connections from people who have liked, mentioned or replied to my posts.

It's disorganised but it's still a map, a social graph.

And I hold it.

Just as I have mine other people hold theirs and so on, and they are all sections of a much larger, interdependent network.

The difference is, however, that each section exists in its own space and is not centrally controlled. I will always hold and own my graph, just as you will yours.

We don't need to export or transfer anything because, as long as you remain at the same domain, all the nodes are always available, not locked away behind the walls of someone else's network.

We don't necessarily have the convenience of a centralised network for establishing connections, patterns and friends of friends, but we also don't have a landlord trying to leverage those connections for financial gain while we rent our space within their property.

Discovery may be harder but we can temporarily borrow the graphs of others, following the connections from our own.

We become more discerning when making new connections, adding new nodes, due to the greater investment in finding them. Our graphs become more meaningful, more valuable and more rewarding.

I know which I'd rather pick.

The web is broken, at least in how it rewards content and creativity. The attention economy favours extremes in the name of views and ad impressions with social platforms accused of compounding the problem. But there is a growing backlash. Links: The social web, not social networks (untitled)

Ten years is an eternity in internet time – we’ve come so far but, in some ways, taken backward steps so it’s easy to get nostalgic. We can each do our bit to reclaim the spirit of the old web. Links: Des’ comment The state of blogging The social web, not social networks

I love the framing here: as I understand it, Colin is saying that the indieweb is more social network-y than the big-name social networks because those are each self contained. With the indieweb there is a bona fide network. An ecosystem. There's been a whole heap of media coverage about how best to combat fake news. I think the indieweb and its associated tech. offer an interesting angle on the fake news question. Fake news...or propaganda (let's call it what it is)...leverages the architecture of big-name social networks to disseminate misinformation as widely as possible. By their very nature, big-name social networks sort of obscure shared and re-shared contents' root source. The importance is the share: "my good bud shared it, therefore I'll look at it." The architecture of the indieweb on the other hand — and of the open internet — preserves the source. Threads lead back to point of origin. This linking back to the source seems to be the current best practice, and I read about efforts to combat fake news by implementing blockchain. I wonder if the indieweb can rise to the challenge?

The web is broken, at least in how it rewards content and creativity. The attention economy favours extremes in the name of views and ad impressions with social platforms accused of compounding the problem. But there is a growing backlash. 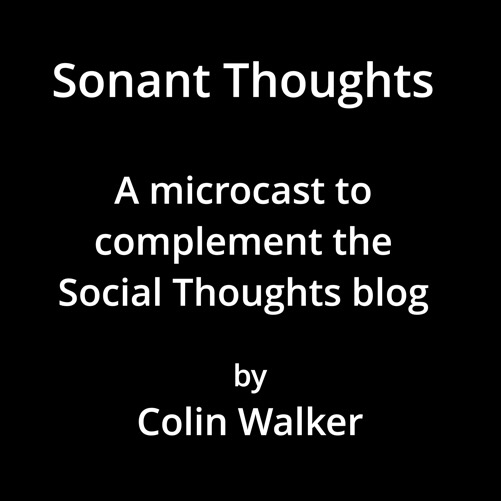 Hard to believe I’m already up to 20 episodes of the microcast. I think I’m starting to get the hang of it.

# Hard to believe I'm already up to 20 episodes of the microcast. I think I'm starting to get the hang of it.

@colinwalker working my way through back catalogue on drive home. Enjoying them all.