Of circles, communities and serendipitous discovery.

I have long said that saved searches are isolated events and treated as second class data when they should, in fact, be an incredibly valuable means of discovery. We have the ability to save searches on networks such as Twitter and Google+ but when you consider that Google a "search first" company it is surprising that this does not feature more prominently within its social network.

Let's consider how we connect and discover with people and content on Google+:

Realistically, a community is essentially a topic based circle that is independent of its membership but wholly reliant on that membership for its content - an implicit network within the Google+ whole.

Proposed on Twitter by Chris Messina back in 2007, the hashtag has become a social staple and popular means of discovery and content tracking. They were adopted on Google+ as an alternative to other potential options such as badges or labels - which already existed within the Google ecosystem - and that is testament to their ubiquity. Even Facebook is rumoured to be considering their implementation.

Google search relies on algorithms to rank the returned results and the introduction of social signals and search personalisation based on Google+ activity means these algorithms are more complex than ever.

In my previous post I discussed the implications of our social feeds being constructed based on behavioural algorithms - as occurs with Facebook's EdgeRank, for example - but it would appear that Google is looking to enhance our experience with these algorithms rather than dictate it.

The new automatic hashtag feature introduced with Google+'s new look is an ideal starting point to spawn a new means of discovery; we can now click on hashtags (up to three per post) to view a card showing related posts in situ, without having to leave our place in the stream, and are also presented with related hashtags.

Google is obviously doing some good work behind the scenes with content extrapolation in order to bring us this additional information but our checks to find these extra posts are still random, isolated, manual acts. 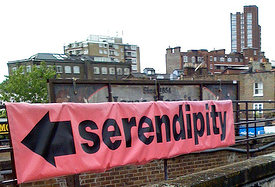 This is a great start but such means of content discovery is an area of hugely untapped potential.

What if Twitter allowed us to follow topics instead of people and have those tweets appear in our feed? What about if Facebook allowed us to subscribe to Graph Search queries so that we could see real-time results within our News Feeds as soon as they happen?

What if we could subscribe to a hashtag on Google+ as though it were a circle so that related, topic based posts appeared in our stream that were not dependent on us following any specific individuals or joining communities?

This would be discovery based on our stated interests.

Now that would be truly serendipitous discovery.

This is an extended version of a Google+ post that can be found here.

[...] Colin Walker posts a thoughtful “Of circles, communities and serendipitous discovery” at his site. [...]