Social gravity, a new definition for the social web.

Current suggestions for measuring the impact we can have on the social web are considered inadequate and there is an ongoing backlash against them. How can we, therefore, better define our ability to influence others? 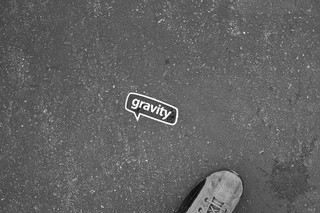 As we have already seen, the science behind influence measurement services is actually pretty sound but even the best algorithms are only as good as the data they are run against.

Influence measurement is not going away and is rapidly becoming a vital mechanism in understanding impact on the social web but, building on the concepts in network science we should be looking at other ways to interpret our "influence".

Social Gravity is an existing term with a number of different interpretations but none of which seem to fit the context of social influence; existing definitions include:

Social gravity is the ability of individuals and groups on the social web to both draw others to them and keep them close - it is a social "glue".

But it goes much deeper than this and we need to examine other areas for comparisons to better understand how it will operate within social networks.

The first law of geography according to Waldo Tobler is "Everything is related to everything else, but near things are more related than distant things."

"All animals are equal" anyone?

Newton's law of gravity states that bodies will attract each other with a force proportional to their masses (and inversely proportional to distance). It causes dispersed matter to coalesce, and coalesced matter to remain intact (a direct equivalent to the ability of social gravity proposed above)

A social parallel to Newton's law would be the size of a network cluster determining the relative pull that it may have on non-members but this is not sufficient to explain how groups form and grow on the social web.

Gravity models are used in social sciences to describe behaviour and generally contain elements of mass and distance, which lends them perfectly to the metaphor of physical gravity - a couple of examples are as follows:

The term "friction of distance" goes on to explain that as distance increases so the effort required to overcome that distance also increases. In a social context, as the distance along a path between users increases so the amount of re-shares required for an item to be seen goes up thus reducing the likelihood that the person at the end of path will be exposed to that item.

At the risk of sounding crude, size is important but it's what you do with it that counts - a cluster that is.

Along with size and distance social gravity, regardless of if we are talking about an individual or a group, is linked to the following :

As previously noted, there are times when members of social networks might establish connections beyond the influence of social gravity: they might seek out popular individuals or influencers to kick-start their experience rather than be drawn organically; others will gravitate towards influencers because it is fashionable - free-floating users looking for the next big thing to attach themselves to whilst it is in vogue before drifting away to something else.

At all other times it is social gravity which draws us together but, just as in science, there are additional forces that must be overcome.

Inertia is the resistance of an object to changes in its state of motion or rest, or the tendency for an object to resist such changes.

People, just like objects, will have a sense of inertia - we are creatures of habit and without external influence will often becoming stuck in a rut and resistant to social change. We may need to give individuals a nudge to get them moving. The goal is to overcome the inertia and extend social gravity wider to encourage engagement from more remote individuals

Social entropy is the measure of decay within a social system such as the breakdown of its structure.

Without interaction a group will naturally drift apart so much of the communication between members of a cluster will just serve to hold that cluster together even before any useful transfer of content is achieved. Engagement is essential for maintaining social bonds, members should also ideally have a sense of ownership (having their voices heard) to encourage them to stay within the group.

Social entropy increases as satisfaction with the status quo decreases for various reasons:

We are, therefore, in a constant battle to maintain our existing connections. This may involve increased sharing, altering of social habits or even attempting to introduce new relationships to ignite new discussion.

What attracts us to Clusters?

Regardless of the structure of a group or cluster relevance and value really come in to their own. Just as an offline model will look at the shops and facilities available within an area so a model of social gravity will examine criteria such as group members, the shared content available and the depth of discussion.

A social group must be accessible in order to maintain a sense of gravity, and this doesn't just mean public. If a group spends its time sharing private jokes between members then, while the bonds may be strong within it, the group will not be an attractive proposition to outsiders.

Users are not going to associate with clusters that have no relevance. Additionally, a small cluster might have higher relative value when compared to a large cluster (even if relevance is equal) due to the content offered by that cluster.

The notion that larger clusters should afford more opportunities due to a larger population would hold true all things being equal but this does not account for the actions of its members. Indeed, size might even be counter-productive due to noise and network congestion.

Just as with groups or clusters, individuals will be relying on the same principles to increase their own social gravity. We are constantly reminded that we must be open, honest, authentic and share quality content. Individuals will increase their relative gravity by their associations with others; to maintain relevance they must align themselves with like-minded individuals (as it is easier to preach to the converted) and share material in keeping with the interests of the target group to ensure a sense of value.

Engagement is key as - unless the individual is already a recognised leader in their field - others will not respond well to a one-way, broadcast relationship. Interaction is vital to cement those relationships with others which cause them to become advocates as without it we are unable to establish a positive reputation.

Social gravity, just as with influence itself, is not just about the level of activity maintained on social networks but the respect and trust that can be instilled in others by establishing reputation, relevance and value. The amount of social activity (between individuals or within a cluster) is secondary to its quality.

Social gravity is a core property of identity, the ability to extend the sphere of influence and is formed by the actions and affiliations of an individual or group. A group's gravity is also affected by its cohesion so it is imperative that stable relationships within the group are maintained to encourage new membership.

The mechanics of social gravity are complex and further illustrate the need to look beyond influence scoring.

So, what is social influence exactly? says:

[...] The theory uses mathematical equations to calculate impact (so cannot directly account for the humanising aspects of influence) but we can relate it to the concepts suggested for the definition of social gravity. [...]

[...] The theory uses mathematical equations to calculate impact (so cannot directly account for the humanising aspects of influence) but we can relate it to the concepts suggested for the definition ofsocial gravity. [...]