Competition is hotting up in the social space as Facebook extends the open graph and Google goes all out with Search Plus and is rumoured to have breached the 100 million user mark. While aiming to keep simple is acquiring Summify a way Twitter can compete? 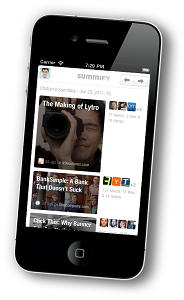 Twitter has a mixed record when it comes to acquisitions:

Summize: Twitter acquired the excellent search company after announcing they were a "perfect match". At the time Twitter said on its blog:

"There is an undeniable need to search, filter, and otherwise interact with the volumes of news and information being transmitted to Twitter every second. We will be adding search and its related features to the core offering of Twitter in the very near future."

Ironically Twitter search has generally gotten worse ever since with the age of tweets you can return being reduced to a matter of days (sometimes even less).

TweetDeck: It is widely accepted that Twitter only bought TweetDeck in order to prevent UberMedia getting hold of it as the company would then have held too strong a position within the Twitter ecosystem. UberMedia was rumoured to being launching its own network and Chime.in (an attempt at an interest-based network) eventually arrived but, without the popular Tweetdeck on board its influence was reduced.

Since acquisition TweetDeck has been reworked to fall more in line with the core Twitter image and functionality which many are unhappy about as they claim Twitter has removed some of the best features.

Tweetie: The popular client for Mac and iPhone, is probably Twitters most visible success story although it was initially greeted with caution from some quarters.

Trendly: Twitter bought Smallthought Systems, the analytics company behind Trendly, and were due to be offering real-time analysis which never seemed to appear.

It has now been announced that Twitter has acquired Summify - a service which produces a summary of key news from your social circle and presenting it in a more elegant fashion - just as it was starting to really take off. On the face of it, this seems like another perfect match for Twitter but it remains to be seen exactly how the network with utilise this new resource. Talent acquisition? No doubt. Technology acquisition? Hopefully.

I said in April last year:

"It is widely accepted that Twitter is not for everyone but this may be a limitation of the timeline format. Perhaps it is time for a bit of a shake-up."

That shake-up finally arrived towards the end of last year with the arrival of #newnewtwitter - a complete redesign and unification of the UI across the different means of access - and I stated that "the new view on the #discovery tab would appear to be the first step".

Summify's ability to filter your feed and pull out the salient items would be an ideal way of enhancing the #discover tab by presenting more personalised news based on your own network rather than a generic list from trending topics.

Summify has immediately shut down a number of features including profile pages and the ability to make summaries public (all summaries will now be private until the service stops supplying them) and, obviously, disabling new user registration everyone will hook in directly via Twitter.

In a way it is a shame to lose the social elements of Summify but Twitter is out to make itself a better service in order to attract and retain more users.

Summify provides value for many but this value is gained from Twitter's content outside of Twitter's control. It is, therefore, in the network's interest to have this functionality in-house and force us to come to its own site where it can regain that control and serve related "promoted content" based on the topics the summary presents.

The acquisition is another example of Twitter wanting to reassert itself on its ecosystem; it is easier to acquire than to build but make no mistake, if Summify had not sold Twitter would no doubt have further developed #discovery with its solution.

Great post. Very similar to the thoughts that were going through my head when I heard about the Summify acquisition news. But one thought here, although the Summify solution is elegant and all, I always found that I had read most of the stories that were delivered to me. Maybe I am a power user? Don't know, but I lost interest after a month or 2.

Nithin - I would expect most power users would feel the same as they spend a lot of time in various networks, Google reader and on Techmeme etc. I have noticed that some are using it as a simple means of curation and then pushing the list out ot their followers but obviously this is no longer available to them and they'll have to do the curation themselves.