Building castles in the sky. 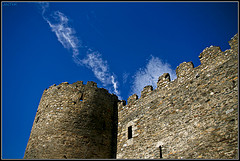 Social networking is currently flawed - we all know this.

We build 'friends' lists with too much ease, often with no regard to relevance, and then have the pain of managing that list 6 months down the line when we realise it offers us little value.

Managing our online lives has become almost a full time job so the possibility of being able to interact in temporary social groups is exciting and removes much of the burden.

There is, however, very much a place for a persistent, focused circle of friends and acquaintances - just as in life - and this circle should be built upon and nurtured every opportunity we get. As I have mentioned before, it is human nature to stick with what we know hence our circle tends to be largely replicated across a multitude of services and networks even when not entirely relevant.

Some attempt to amass as many followers as possible, almost like a badge of honour, and are enticed by the ever present "grow your followers" sites.

Numbers aren't everything - we also know this.

But there is still an obsession with score: how many followers, how many retweets, likes, shares. The social web is still full of those wishing to have their ego stroked and sites such as Klout are taking full advantage, comparing us with our peers and reinforcing our superiority or inferiority complexes depending on our result.

Klout is right to say that it is the interaction with our followers that indicates our true influence and not just the number of followers we may have but - at the same time - a small, well engaged audience might still not compare  with a larger, less focused one.

If one person retweeted every single thing I write and clicked on every link I posted it would be deemed totally influential for that person (if not a little creepy) but as the range of influence is limited it is virtually worthless.

But Klout is flawed as we have seen with the Beyonce debacle where an account attributed to Beyonce Knowles achieved a Klout score of 50 purely based on followers and was reported as having over 500 retweets despite never sending a single tweet itself.

Numbers do have a part to play but not in isolation, those numbers must be targeted and relevant which makes a recent trend in the tactics of social startups worrying.

Sites have taken to offering earlier access to their service based on the number of new recruits you sign (direct referrals) and also those that your sign-ups recruit (indirect referrals) - a social ponzi scheme.

Connect.me was so successful with this method of generating a viral interest that the security company Sophos considered that the sign up site might have been some kind of malware. Facebookalternate.com, speaku.com and dabble.in have all followed suit leading to a flood of tweets and shares asking you to reserve your place.

The rush to recruit is becoming an internet ﻿popularity contest potentially undoing any good through greed. If we are merely getting numbers to secure our early access to services are we really building strong, useful communities or just building castles in the sky - pointless pyramids whose only purpose is to serve those at the top.