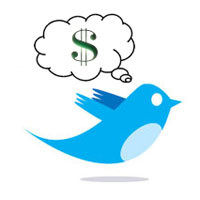 It has often been pondered when Twitter would sell but it is just as equally a case of when would someone buy and if when then who? Following a number of high profile acquisitions by Google and AOL, amongst others, the topic is firmly back on the menu with the likes of Dave McClure and Henry Blodget reciting the old mantra that it should be Google and the time is now before it's too late.

Twitter has yet to demonstrate a robust, reliable means of revenue generation. Although Dick Costolo has said they are "definitely beyond the experimentation stage" features come and go - early bird deals, for example, weren't a great success and have been put aside for now.

Promoted tweets may be costing up to $100k but many have yet to be convinced that this is the way ahead and caution is urged.

One thing just about everyone can agree on is that the design of #newtwitter leaves the site open for much better monetisation possibilities due to the new right hand pane but do Twitter themselves really know how to make the most of this? Can developers with pet projects really make effective businessmen? Or are they too close to the product?

The staff at Twitter have always maintained that any advertising on the site would not be invasive and would have to demonstrate effectiveness in order for an particular run to continue. As I wrote back in April:

Twitter expects promoted Tweets to be ‘useful’ – their gauge of this will be if they are shown to resonate with their intended audience, presumably by that audience replying or tweeting. Those tweets that don’t ‘resonate’ will no longer be shown.

Can Twitter find a balance between the need to finance itself and that to keep the site clean and thus avoid annoying its users?

Eric Schmidt thinks Twitter should be able to monetise so what is holding them back? Is it the desire to keep the intrusion to a minimum? When will the economics of running a fast growing company take precedence over technical and design ideals?

As mentioned above, it is often suggested that Google should be the company to buy Twitter but, after the announcements surrounding social layers, it would appear contradictory to the direction they are taking in the social space. With 'layers' Google appears to want the social aspect to act as an additional resource to enhance the user experience around the content; it's the content that matters most whereas, with the likes of Facebook and Twitter, it's all about the network.

If we get away from an acquisition for competitive purposes (i.e. to battle Facebook) then timing is everything. Will anyone buy Twitter while it is still in this early stage of revenue generation or will it actually take a buyout - with dedicated, experienced staff on the business side - to make Twitter turn an effective and meaningful profit? Does someone buy into that potential described by Schmidt or do they wait until the coffers start filling?

Regardless of your opinion or position, Blodget does have one thing right: the longer anyone goes before putting in an offer for Twitter the more expensive that offer will be and will have to be one that Twitter cannot refuse but at what cost to the network and users?