I originally wrote a version of this post in July 2009 for a different site which is now defunct so it can no longer be found on the web. Rather than lose it completely I have re-posted it here with a few ammendments to bring it up to date. 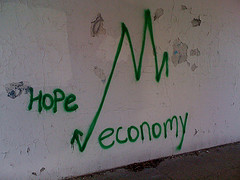 Social media and the global economy - the parallels are striking and significant.

Now that the global economy appears to be on the upward curve of a major economic "downturn" it is obvious why things have failed. Hindsight is a marvellous thing but too often we don't learn from what hindsight has shown us.

Perhaps, more importantly, we also don't learn from those with the foresight to realise when things are about to go south. There were those who had been forecasting a major financial crash and there are those that have long been forecasting problems ahead with the social media "industry".

Social media has seen the expansion of the biggest online bubble since the whole dot-com boom and, just like the money markets, it was not hard to see that this level of growth was unsustainable.

Just like our economies, social media services have their own "interest rates". The more compelling a service (just like a savings account) the more we invest our time in it and, consequently, the more "interest" is paid. If a service becomes less interesting we invest less and, as it can no longer support the same levels of excitement, the "interest rate" falls.

These relative rates between services, and the cross over of features/interoperability, can be likened as the social media equivalent of the exchange rate between currencies. The rates will be in a constant state of flux depending on what facilities they offer and the perception the users have based on comparisons with similar offerings. As consumers we cannot help but compare our network of choice to the alternatives and the networks themselves should be doing likewise in order to consistently offer the best service they can.

As far as 'mainstream' usage is concerned, Facebook is the equivalent of the US dollar against which all other services are judged. While those in other markets may not feel that the Facebook dollar is the most relevant currency, the market needs a point of reference and that falls to the service with which 'Joe Public' is most familar.

Just as "real world" companies had been surviving on debt the social media sphere has existed on "borrowing" ideas from somewhere else, mimicking the functionality of other services. As there are only a finite number of ways you can communicate with someone else over the internet we obviously can't go on with this borrowing. The credit (ideas) either runs out or no-one wants to lend to you. This is when we get the creation of walled gardens - businesses doing their own thing in isolation: a retreat from the global sense of openness that social media tried to instill in all of us.

Aggregators and other services quickly became a repository for rehashes of information held in other places - trading (and potentially profiting) on the returns made elsewhere - money for (essentially) nothing and, perhaps, could be seen as the social web's version of the "fat cat" bankers.

In the past year or so it has been interesting to see that - like a number of banks - various social media services have folded; the social web became too disjointed with too much replication without innovation. The mistakes have been recognised in hindsight and now, with curation services, the next wave is trying to provide additional value. Just as the banks are now required to hold more capital inventive presentation, intelligent filtering and recommendation are the tools being used by the new breed of services to prevent themselves become functionality bankrupt.

Consumers are now considerably more wary about where they invest their online time so services are forced to adapt to meet these premium needs rather than target themselves at the sub-prime market of the past where just about anything would pass as a social application.

Social products must now provide real utility rather than merely just a platform to communicate.