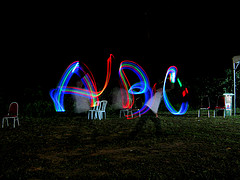 It's been a while since I first wrote the 5 C's of Social Media and the social web has moved on. At the time I said "social media is all about people" and the focus was very much on empowering people to contribute. I was very keen that business should be adopting social media to better communicate with their customers and not just by using it for the hard sell.

Well, businesses are now utilising social networks to the full and some even have the social web as a business model. While the 5 C's are still just as relevant the focus has shifted and, perhaps, the way we interact can be viewed in different ways based on the way we are now using the social web.

I recently wrote "At the most basic of levels the value of the social web could be as simple as A, B, C, D, E: Attention, Broadcast, Connecting, Discovery, Engaging" in order to bring things a bit more up to date. So, in the broadest possible terms to match that simplicity, here is a quick overview:

Whether we are bloggers looking for traffic, businesses looking for customers or just private individuals looking for conversation we are all fighting for the attention of our prospective audiences. Social channels are ideal for these purposes now that many are investing more and more time in their network of choice. It is often said that you should go where your customers are so where better than the likes of Facebook, Twitter or YouTube - viral marketing is the ultimate attention grabber.

While social media is "not about the hard sell" it is still an incredibly effective way of getting your message across. Traditionally, advertising is the route taken but - while it has been shown to be effective - many resent the intrusion of advertising. Using social networks to broadcast your message is, essentially, stealth advertising that allows an instant response from your customers. It is most likely this ability to respond that makes it more palatable and leads us to...

Rather than being faceless organisations social networks afford companies the opportunity to connect with their customers in a way never previously possible. Using a social network as a customer service channel is genius; empowering customers by letting them connect directly with a company representative comes so naturally now that we dismiss those not participating.

The social web has taken discovery way past the functionality on offer by the search engine (although Google is trying to catch up again). Services such as Stumbleupon, recommendation lists and links curated by our friends all combine to make it easier than ever before to discover interesting new content or people. The phrase "the world is shrinking" has never been more apt.

Just connecting with each other is not enough; as I said before, the real social currency is the relationships we forge when using social networks be they personal or business. A social network without engagement is just an empty space and achieves nothing. One full of conversation, however, gets people better invested in whatever it is you are selling whether it's your personality, your blog or your business.

The social web need not be difficult and is often over complicated by some claiming it can only be manipulated by those with seemingly mystic powers, although it is often easier to outsource due to lack of time, knowledge or experience. Social networks are there to be enjoyed - even if they are being used for business.