Are social platforms the next Microsoft? 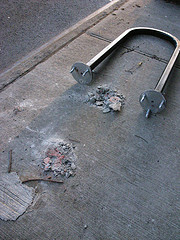 Jason Calacanis may have been shouted down when he warned startups that Facebook could, potentially, steal their ideas but he makes a number of good points, especially when you consider recent history.

In the early years Microsoft were viewed as the bad guy: frequently accused of bullying tactics, stealing technology and abusing their power due to their shear size. Eventually, a mixture of backlash and the increasing interests of the US Department of Justice and the European Union necessitated a better business ethic (admittedly a simplified overview but you get the idea.) Much of Google's appeal came from the "do no evil" mantra which became a direct counterpoint to how many viewed the Redmond software giant.

Fast forward a few years and, now, Twitter and Facebook are essentially being accused of the same thing. Stealing ideas and bludgeoning their way through the social web in an attempt to monopolise as much traffic and advertising revenue as they can.

Both Twitter and Facebook have a demonstrable history of mistreating the third party developers working in and around their ecosystems. With growth comes an increased sense of power and entitlement. Devs have been filling holes in social media services ever since they began but the services are taking back what they now consider to be rightly theirs.

The social platforms are taking ideas from the developer community surrounding their infrastructure and modifying them for their own ends. In some instances they have purchased or absorbed the original developer but how much of this is "sell up or we'll crush you"?

Twitter bought Summize to integrate the excellent search functionality but has consistently reduced the value of search by making the available history smaller. Facebook bought Friendfeed and vowed to keep the site alive but it has stalled and all but died. Both, as I have mentioned in the past, were technology acquisitions for purely selfish reasons.

Twitter has had its share of controversy with the attempted killing of old style Retweets and now taking back the Tweet button from about the most successful ecosystem startup Tweetmeme. While Twitter may have partnered with Tweetmeme an licensed some of the technology powering the tweet tracking functionality you have to wonder about the outcome had Tweetmeme decided not to play ball. In any event, the Twitter Tweet Button functionality is grossly underpowered when compared to its predecessor causing some to migrate to Topsy.

Startups have been criticised for purely basing their business around Twitter but bit.ly can probably feel rightly aggrieved now that the social network has decided to implement its own URL shortening system and replace bit.ly as its default shortener. It could all, however, be irrelevant when Annotations eventually become a reality and URLs are moved to metadata rather than being part of the tweet itself.

Facebook has been surrounded in controversy from the Beacon advertising fiasco to the privacy debacle surrounding Instant Personalisation. The attempts to make the entire web an extension of itself via likes and the social graph caused some to question Facebook's motives.

Coming more up to date Facebook has been accused of trying to squash Quora with its Questions and Answers feature. Also, with Places, Facebook might hope to kill the likes of Foursquare and Gowalla despite supposedly being in partnership with them; although this appears to be backfiring so far as Foursquare is seeing record growth.

Microsoft ran in to trouble when it was considered too big and was using that size to an unfair advantage. Can we envisage a time when a social platform is large enough to attract the attention of the authorities for anti-competitive behaviour?

Will we see complaints from one service against another or will complaints come from outside the social web as other areas start to feel threatened as social platforms look for new areas to expand to beyond their traditional domains?

Tweets that mention Are social platforms the next Microsoft? -- Topsy.com says:

# Ten years ago (yes, a whole decade) I asked "Are social platforms the next Microsoft?":

"Can we envisage a time when a social platform is large enough to attract the attention of the authorities for anti-competitive behaviour?"

Facebook and Twitter had already been changing the game, buying smaller companies whose products made them better, or stealing their ideas. Back in 2010, social networks weren't the powerhouses they are now, so ingrained in our psyches and societies, but the writing was on the wall, it was obvious they were already vying for a much larger slice of the pie. Om Malik writes "Going back to Microsoft, the company whose troubles with the government have many similarities with Facebook, I would argue that they are doing what they have always done – using their market size as a moat and expanding into new markets. We don’t realize it just yet." He's referring to their acquisition of LinkedIn and GitHub, more ways of acquiring data and leveraging this to acquire dominance in areas that may not have been obvious previously. Social has changed almost all games. It doesn't stop there. Amazon continues its march to become the marketplace for everything, Google is always bin the mix, Apple continues its march into services, and you have to wonder where Salesforce is heading after the acquisition of Slack. You can't blame these organisations for wanting to grow, expand, become more profitable, but the manner in which it is happening leaves cause for concern. I finished that post ten years ago with a two part question. The first, "Will we see complaints from one service against another" has been largely nullified by the purchasing power of the big guns, although there have still been instances such as Snapchat's complaint about Instagram (and now everyone) stealing the Stories feature. Yet, that was expected, as I also wrote in 2012:

"Once a feature exists on one platform the consumer comes to expect it no matter what they are using. Popular functionality becomes the de facto industry standard by virtue of demand - if your platform doesn't have it your customers will want to know why."

The second half of that closing question was by far the more pertinent: "will complaints come from outside the social web as other areas start to feel threatened as social platforms look for new areas to expand to beyond their traditional domains?"