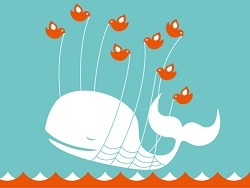 After Twitter experienced a third outage in less than two weeks - this time due to the "failed enhancement of a new approach to timeline caching" we are left asking "is it a case of too much too quickly?"

No public service of this magnitude should be expected to be without issues but the recent multiple outages are starting to become a cause for concern amongst social media types. Twitter has a history of having infrastructure issues and the current problems are becoming reminiscent of the torrid time experienced last summer. It currently seems that every time Twitter implements a new feature something else breaks.

Last year, it took Twitter a long time to re-establish trust in the service after a summer of the Fail Whale. At the time many users were considering leaving and never returning - the feeling that the service could no longer be relied upon was that great with many feeling that they could no longer justify investing their time in something that would just let them down.

If Twitter wants to attract advertisers and become a viable platform for both promoted tweets and for selling spots in trending topics then they need to retain trust and prove that they are stable and that we are not heading back to another summer like last year. No-one wants to risk investing in an advertising platform that will not give a decent ROI due to service down time. A failure to get it right first time will almost certainly kill Twitter's chances of being given a second bite at the cherry.

Twitter needs to be completely open and honest about the issues they have been experiencing. This is one area where they do, at least, have the edge over some other services. They are normally pretty quick with an admission that they screwed up - honesty goes a long way but they also need to show that they are learning from their mistakes.

They also need to publicly demonstrate the steps they are taking to increase both capacity and resilience, not just to meet current needs but to also future proof the service considering the current rate of growth and the potential for further impacts due to new functionality.

Finally, Twitter has to demonstrate effective, intelligent decision making; there has been a issue in the past with Twitter's ability to handle the load from large events - well, they don't come much bigger than the World Cup. Is it wise to roll out new features during such a time when you have already been exhibiting problems coping?

Too big to fail?

Twitter is being quite aggressive with updates and feature rollouts of late, perhaps a more softly, softly approach might be in order for a while. Implement one thing at a time and let it bed down for a while before thinking about the next thing.

As the other contenders and pretenders fell by the wayside (identi.ca, Plurk etc.) Twitter became the de facto standard for micro-blogging and short status updates. Celebrities reveal their inner most (ofttimes vacuous) thoughts, election campaigns have been staged and fought, and global corporates have been brought to task. Just like the banks Twitter has become too big to fail and, as a company, needs to do everything it can to prevent that from happening.

Does the World Need More Than One Twitter? says:

مدونة x686x» Blog Archive » Does the World Need More Than One Twitter? says:

[...] up on the company, by any means, although plenty of observers have taken its recent downtime as an excuse to do just that. The reality is that Twitter is trying to do something incredibly ambitious — namely, to build [...]

Does the World Need More Than One Twitter? [GigaOM] | BYOHosting.com Blogs says:

Does the World Need More Than One Twitter? - A Collection of Latest Happening in Technology Field says:

Android - time for a change. 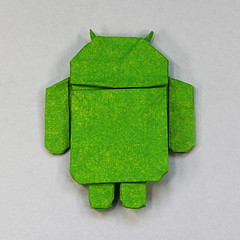 Ever since spending three and a half years doing outsourced support for Microsoft I had always been a "softie" at heart - that much exposure can be akin to brain-washing and we always used to joke that I had an MS barcode on the back of my head. This attitude was very noticeable in that the original "Randomelements :: Blog" was self hosted on one version of Sharepoint or another (wow did it really go back to 2004?)

It was only natural, therefore, to move to the Windows Mobile platform as my smartphone of choice - starting with the Orange SPV550 and moving through a few other phones and OS iterations. Coming from that background I am obviously used to being able to install apps from anywhere so I resisted moving to the iPhone on a point of principal - the closed system with all applications needing to go via the App Store just seemed an unnatural barrier which you shouldn't need to rely on jailbreaking to get around.

There is not doubt that the iPhone (and now the upcoming version 4) was a gamer changer and a great device but one which didn't fit my needs or way of doing things. When my HTC Touch Dual finally died (after many, many flashes of custom ROMs) I spent a year with the Nokia XM5800 which, in all fairness, is a great phone but a bit bulky in the pocket so, the time came to move on - Gravity by @janole, however, is an absolute MUST for anyone with a supported S60 device.

I'll admit that I'm late to the party as far as Android is concerned but maybe that's for the best. I've entered the fold with the OS at v2.1 so never experienced life without multi-touch or the app drawer; instead I have the great looking Sense UI and a very stable, mature operating system at my disposal.

In a way the HTC Sense UI is almost like a homecoming having used TouchFlo/Manilla on Windows Mobile so my new HTC Desire was instantly familiar straight out of the box (OOTB).

With the inpending arrival of the iPhone 4, the debate over whether iOS or Android is better has been raging just as furiously as the Mac v PC argument ever did. Nowhere has this been highlighted better than Robert Scoble's post on Buzz. Robert has been extoling the virues of the Android OOTB experience: "all my contacts, apps, calendar items, and other things automatically synched without hooking it up to anything" but (despite using a gmail account for years) having all of my details in Outlook I did not experience this.

As you would expect, the integration with the key Google applications is pretty much flawless and all achieved by just entering your GMail account details as part of the device setup. Even those apps in beta are seamlessly linked to your GMail account - take Google Listen as a great example.

I'm a big @scottsigler fan (an original junkie) so setting up his podcast in listen was my first priority; after doing so I was surprised, nay, delighted to find that Listen had automatically added it to a "Listen Subscriptions" section in Google Reader. How cool is that? 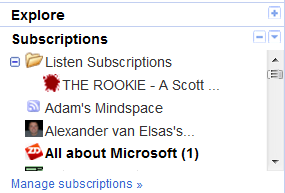 It is this flawless integration that has prompted me to change the way I do things. I have converted all of my contacts to Google Contacts and - wait for it - completely dumped Outlook as my email client; I just don't need it any more. Sorry Microsoft!

It really is something to say that a phone has altered my behaviour but there it is. There are a few holes such as the lack of a native file manager but the Android Market is beginning to flourish and is populated with numerous, good quality, free applications to fill these gaps.

Android is here to stay and not just make up the numbers.

Tweets that mention Android – time for a change. -- Topsy.com says:

[...] This post was mentioned on Twitter by Brandon Hill and LG Stream, Colin Walker. Colin Walker said: New post: Android - time for a change - http://bit.ly/cjZZ4K - Can a phone change the way you operate? [...]