Why all the buzz about Buzz? 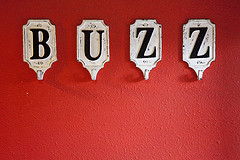 Google Buzz was launched with some fanfare back in February but, I must admit, it completely passed me by at the time. It is still a fledgling service that resides within GMail rather than being a standalone offering so why is it garnering a lot of attention at present?

In light of recent events the most obvious thinking is that people are migrating to Buzz as a backlash against the changes made by Facebook and that is perfectly understandable.

While, not for the same reason, a similar thing happened to Twitter when it was experiencing major performance issues a couple of years ago and we all saw more of the "fail whale" than was good for us. Users went off in search of other homes on the web including Plurk and Identi.ca, for example.

Friendfeed also experienced a huge upsurge in usage at around the same time and it was Friendfeed that I immediately thought off when jumping in to Buzz for the first time - Friendfeed from back at the beginning when it was simpler: likes, sharing, comments and aggregation.

Just as with Friendfeed items in Buzz jump to the top of your timeline when they receive updates and the whole service just feels like stepping into a time-warp. Perhaps this is part of the attraction: just stripping things down to basics and letting the conversation take over. It is simpler than Facebook, in a good way: no games, no ads.

Maybe it's because the social media early adopters remain essentially the same people but even the community on Buzz is an echo of the past - the likes of Robert Scoble, Louis Gray and Thomas Hawk are all very popular, just as they were on Friendfeed. In fact Scoble has drawn up a wish-list of features which virtually mirror a lot of the functionality Friendfeed users have become accustomed to including real-time search and filtering.

Louis has said in a recent post: "I thought that answer was FriendFeed ... But momentum on the site dragged, and the sale to Facebook pretty much confirmed what many thought - that it would never achieve its potential." He also mentions that Buzz has the same potential as Friendfeed "but is driven by a company that appears committed to making it succeed. There are regular updates to Buzz. I have seen some of the sharpest engineers on Google working to make this a success" - the same, however, was said about Friendfeed in it's early days - it was, after all, staffed by many ex-Googlers and the commitment was just as great.

Friendfeed's technical success was, without a doubt, the reason it was acquired by Facebook. Rapid development (often in response to user demands or suggestions) and the first real time search made Friendfeed the leader of the pack so it was unavoidable that the service would suffer after acquisition - this was a buyout of technology, people and know-how. Friendfeed already had a large social network (the largest) why would it need another? To save reinventing the wheel.

Development on Friendfeed has all but stopped but what is to stop Google going the same way? With the "always in beta" philosophy they have previous form when it comes to dropping projects that don't quite work. Hopefully Buzz will not follow that route.

Google have made two key decisions while developing Buzz:

Those such as Scoble may be crying out for Buzz to be a standalone app (I am inclined to agree) and not be contained within GMail but including the new offering directly within the most widely used web mail service on the planet (over 175 million at the end of last year) provides the type of exposure that most startups could only wish for. If even just a small percentage of GMail users investigate Buzz then this is still a sizable number.

Friendfeed had a big failing in not having it's own in house mobile solution, it came down to Benjamin Golub to develop the excellent third party solution fftogo.com which contributed to him being employed by Friendfeed full time. Google have a long history with mobile devices and really see the importance in getting this right from the outset.

The biggest thing in Buzz's favour is, obviously, the huge weight that Google can throw behind it - it is already a trusted name and an instantly recognisable brand. Google, undoubtedly, has the technology required to provide and scale up a huge network with minimal down time. Add to this the wealth of experience of the Jaiku developers who are still on board since Google absorbed Jaiku in 2007.

The ready made user base of an existing means on communication, as I have already mentioned, is ideal for the launch of a social network; Buzz is a natural extension of the combination of GMail and Google Reader and an ideal opportunity to share your pictures from Picasa thereby increasing the visibility of that service as well.

The one thing Google should really try to capitalise on is the bad feeling towards Facebook - nothing boosts success like the failure of others. By extolling the virtues of Buzz - as a contrast to the apparent vice of Facebook - Google could stand to boost both the number of users and sheer amount of usage as people migrate.

As others have already said, we do not want a web where we have just one dominant short status update service (Twitter) and one dominant social sharing service (Facebook) - competition breeds innovation and that can only be good for the consumer.

Tweets that mention Why all the buzz about Buzz? -- Topsy.com says:

Buzz for me is just Twitter comments. Since I connected my Twitter feed to Buzz, I tweet something and friends Buzz back with long comments. It does spur quite a good discussion from an initial 140 character statement.

Chirpir News | Why all the buzz about Buzz? says: