What is the real aim of social media? 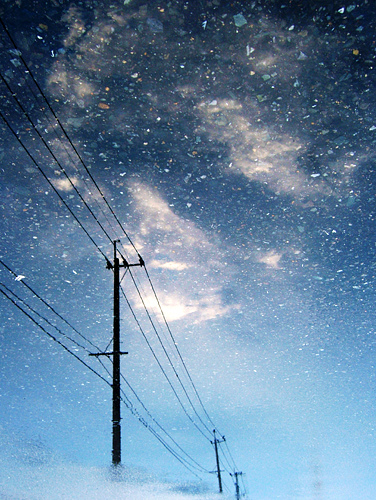 We get so caught up in the pros and cons of individual services that we forget to look at the bigger picture and ask ourselves exactly what we are trying to achieve with social media. What is the purpose behind it and why do we devote our time to using it?

These connections are not limited to just being online, in fact our goal should be to carry our connections away from the computer and into real life.

Alexander van Elsas wrote a post on yesterday arguing that the humble television is actually the most effective social media channel we have to date. What? I hear you cry! TV doesn't fall in to our cosy definitions of what a social service should be so what is Alexander going on about?

The act of watching television may often be a very singular and individual pastime - especially with households having more than one TV set - but it is not theat act that we are interested in. Alexander used the example of a major sporting event to demonstrate how television will create a link between people and parts of the community who would not normally associate with each other. Spectator sport is about just that: the spectators. It is the sense of belonging we get when we are involved in something bigger than us that we know hundreds, thousands, if not millions of other people are experiencing.

It doesn't stop there, however. While gathering in pubs and bars, and even in public spaces when large screens have been erected, to watch an event with your peers is an obvious connected at the time of the event we can also look to the after effects, the water cooler moments that are generated by our normal viewing habits and not just large sporting occasions.

We like to build common ground with our friends, peers and colleagues and television can help us do this. We are social animals and like nothing better than to discuss the minutiae of our favourite soap operas, drama series, or the documentary that just blew our minds.

Ryan over at Tilling the Soil talks about social media building bridges between individuals in order to avoid the need to catch up; if you are communicating online then you already know the "what have you been doing" parts of the conversation so can move straight to the good stuff. This is okay for people who already know one another but it about relative strangers? It is often difficult to engage in small talk without a common interest - television fills the gap and gives us something to discuss where there would normally be uncomfortable pauses.

It may be argued that television is killing the art of conversation - and unchecked there is no doubt that this can be the case - but it can also be argued that that the box in the corner of our rooms encourages different conversations, perhaps not the ones we may have had in the past, but wider ranging conversations with potentially more people (a gathering at work or school instead of a couple of members of the family).

The ability of this medium to act as an ice breaker cannot be underestimated and the real challenge for 'social media' is how to replicate this type of behaviour. Granted, television has had time to become integrated in to our lives but it too started small with many failing to see how it could be of benefit. What we now have to ask is how can we promote social media in order for it to achieve a higher level of adoption. How can social media penetrate to this degree?

Ryan states that he uses social media to supplement his real life relationships but we should be going beyond this and using it to forge new relationships which we can then continue in an offline setting. Social media needs to be giving us the common ground so that we can avoid the embarrassing silences and dive headlong into fruitful, meaningful relationships and conversations with those people that we may only be meeting in the flesh for the first time.

Don't we already do with with existing media? What about the telephone and email and any other means we use to keep in touch and share information? Indeed we do but the speed, ease of use and range of the connections we can make with social media are adding an extra dimension to traditional means of communication.

Still, just talking about the future doesn't make it happen so saying that social media will be more prevalent in 2,5 or 10 years and change the way we live and communicate isn't enough - we need to start working out how we are going to reach that point.

[...] known to mankind. And as Hutch Carpenter pointed out, Alexander might be onto something. I left a comment on Colin’s blog saying people could watch a TV show, call up a menu on the bottom or side, [...]

To some extent, social media does appear like a regular way to keep in touch. A new Twitter user often wonders, " what to do after creating account?" . Facebook takes ages to download on slow broadband connection. Plurk is giving such a confusing interface. But they all have mashed up well with each other, and create channels to promote and market your online presence.

Colin,
Thanks for the reference. I too have seen the value of TV lately as I've watched 3 seasons of LOST in the last month and have developed more conversations with the guys I spend time with because of it. This is the funny thing - I can post a status update related to what I'm watching and get a number of real life responses because of it.
I think that TV is great because it is one of the few universal common grounds (whereas the market infiltration of all our other social media toys is >1%)
I still believe, however, that it comes down to why you are using it. I'll leverage whatever I can to grow my relationships because more and more I'm realizing that life is better with people.

Yes and I do get that, however, where is all the mystery and romance in meeting people, say just by bumping into them in a shop, or seeing them in a cafe etc?

Let's take how we met for an instance. Would I have seen your blog and got butterflies in my tummy? Nope! But I did when I saw you the very first time in a very random situation, in the real world.

I agree, which is why I say that we should use SM to enhance existing relationships and create new ones which we can take in to real life for proper face to face interaction. SM will,hopefully, just make it easier for us to connect in the first instance and keep in touch when we cannot get together in person.

"Still, just talking about the future doesn’t make it happen so saying that social media will be more prevalent in 2,5 or 10 years and change the way we live and communicate isn’t enough - we need to start working out how we are going to reach that point."

And WHY that will be the case, not everyone wants to rely on SM for communication now, 2.5 or even 10 years down the road. Some people actually 'like' doing it the old fashioned way.

I understand that SM helps networking and in some cases reuniting, I use it myself for that reason, but if it ever becomes equal to or is used more than traditional communication I think that will be a very sad point in time.

Nice post Colin. Hmm, thinking about your take home question. You know of Current TV I'm sure - a TV channel broadcasting content from the web, founded by Al Gore (I think) and seems to be the closest connection between TV and social media in a fuzzy way at this point. What people could use is the ability to watch a TV show, call up a menu on the bottom or side, see who else is watching and zip messages back and forth - kind of like YouTube "who else is watching"

I don't think the role new social media applications are playing in removing barriers to communication can be stressed enough. i don't know that any one particular social networking app is going to have a dramatic impact but I am confident that the impact and ultimate goal they all share will.

Yes, the concept of social media (rather than any given service) will have a big impact but just SAYING it will is going to achieve nothing. It is the steps we take to increase adoption and influence that will determine the way forward.