The sense of release from knowing that the blog package works must have unclogged the mental pathways — after not being able to write more than a few notes for days I have managed to knock out about 600 words this morning, a good start to Chapter 11, a chapter that was really causing me problems.

The relief is palpable.

I've been crossing off the days having at least contributed something to the project but felt a pang of guilt for doing so when those contributions amounted to little more than a sentence or a couple of bullet points. It feels good to have writing something more substantial.

In Chapter 10 I was writing about the self-imposed pressure to write every day during the #write365 project while putting the same pressures upon myself now. It seems natural to want to keep a habit going by means of repetition but is that always the best way? Oliver Burkeman, author of The Antidote: Happiness for People Who Can't Stand Positive Thinking (which is in my "to read" stack) wrote about acting Dailyish rather than every day:

it involves surrendering the thrilling fantasy of yet-to-be-achieved perfection in favour of the uncomfortable experience of making concrete progress, here and now ... it isn't synonymous with "just do it as often as you can"; deep down, you know that if you never average more than a day or two per week on your novel/fitness plan/meditation practice/side business/whatever, then you won't acquire the momentum to move forward. "Dailyish" involves applying more pressure to yourself than that.

This is where his definition of pressure and mine diverge. The crucial distinction, he says, is that "it's a matter of pressure rather than of forcing." Putting pressure on yourself to do something as often as you can is vastly different from forcing yourself to turn up every day whether the will, enthusiasm or inspiration is there or not.

I shouldn't feel guilt. If I am going to hold myself to daily contributions then I should accept that some, to continue the theme, will be more equal than others. But all are equally valid and ultimately contribute to the whole.

My MacBook Pro has recently been crashing requiring me to hold the button to power cycle it. I'm pretty sure it first happened before it fell on the floor, so don't think it's a hardware issue because of that, but it has definitely been since versions of Big Sur post 11.1.

Checking the system logs I see references to missing files related to the GPU bundles — this might make sense seeing as the screen flickers and goes dark but the Mac still appears to be at least partly alive.

I may do a reinstall of MacOS over the top. 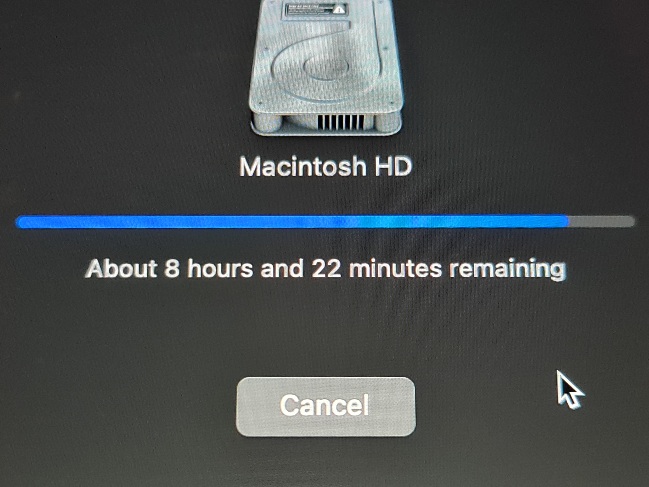 @colinwalker Is that for a Big Sur reinstall?

@colinwalker I remember there was an issue with a previous macOS version where people who had homebrew installed in the default /usr/local location were having the install hang, but I haven’t heard of that with Big Sur. I use MacPorts at work now, but always kept HB in ~/brew.

I don't have homebrew installed so it won't be that. Hopefully it'll recalculate in a while.