It's as much a note to self as a positive greeting, a reminder of where we are in a week that feels like it had at least an extra three days injected in somewhere.

I loose track. The days seem the same and merge into one and I'm never entirely sure of where I am. And we still face a long covid winter and the threat of ever tighter restrictions as cases rise again.

We avoid going out as much as possible, better safe than sorry, which only exacerbates the "days rolling in to one" situation.

But I'm sure, no, I know today is Friday, and that's a good thing.

@colinwalker Just noticed that the RSS feed seems to have gone from your website. :(

@wearsmanyhats Shouldn't have done, that you've replied here shows it's still feeding in to m.b

@colinwalker Got it added, thanks!

# Jay's comment on yesterday's post about the blog's design got me thinking again about what a blog actually is.

He remarked that how you think about a blog is, at least partly, determined by if you see it as an archive or just "thoughts right now" and this goes back to my previous musings about ephemerality: the daily blank slate, as inspired by Dave Winer and Drew Coffman. Is a blog a place to check in on someone at any given point or is it an historical record?

My blog is still both but currently favours the former because it defaults to the Daily view without direct links to previous days or the archive.

Definitions are, or should be, largely irrelevant now; a blog is whatever you make it, in my opinion, and I've moved so far from what tradition would call a blog. Still, the notion of it being either an archive or "of the moment" is really interesting.

I've written before how my changes in focus over the years have meant that older posts no longer reflect who I am as a blogger or as a person. The shift from largely thematic to a mostly personal site made much of the pre-2016 blog irrelevant if you were using it to gain an understanding of who I am. In that respect there is mixed feeling about, and mixed value of, the archive.

Even since 2016 I am unsure as to the value of much of what has been written and, let's face it, who actually goes back and reads all the old stuff? I will link to various posts and be self-referential to display a train of thought over time (I could pepper this whole post with links) but most of it can be ignored and is forgotten.

I think a personal blog is like a relationship, a "getting to know you" over time experience. As Jay mentioned in his comment:

"If you want things on context day after day. Sub."

When we meet people we don't go back through their history to decide if we want to be friends based on everything that's happened before. We jump in at the "here and now" and take a chance, picking stuff up as we go along. As we get to know each other more detail will be filled in as things get shared, we start to build up a picture but it is a gradual process.

I now see a blog as the same. Old posts are like memories, stories we may recount to new friends when circumstance demands their telling. We grow together.

I agonised for days over what to put on my "required reading" page but is one really necessary? Do visitors need a potted history or are they, just like in a relationship, going to start from "here" and take a chance. If it doesn't work out we just go our separate ways.

We are social animals and it's nice to share, nice to have touch points with others. A blog is a touch point, a way of letting people know what's been happening, what we're thinking or feeling, but it is as much for the author (if not more) as the audience.

Blogs used to be very specific things, there were rules and requirements for something to be so named. Things and times change; social networks forever altered everything we knew about connecting online and it is only natural for blogs to alter as well. Blogs are not set in stone, beholden to ideas from 20 years ago, they can and should adapt to the current zeitgeist and beyond, be disruptive rather than conformist.

Blogs should be as individual as the person writing them - their appearance and how they work as well as the content.

@colinwalker this Jay...who is it? I clicked the link in your post and it says it’s not available...

@jhull Gah! had a double https in the link, fixed now. Thanks for pointing that out.

# Manton Reece recently rolled out Micro.blog 2.0 with a whole bunch of improvements across the web and native apps; it's great to see him constantly improving the service and getting more people back into blogging regularly.

When I mentioned yesterday that I mainly use m.b as a commenting system Alan remarked that he had returned to the service so he could comment on the blogs of others but wanted to be able to send webmentions from his own blog instead.

External webmentions have always worked to a degree on micro.blog but the site sending them has to be linked to a live account in order to be accepted and show - makes sense. In the past I've always gone back to m.b in order to reply to comments as it seemed more reliable but, inspired by Alan, I thought I'd give it a test today.

Here's a reply to a comment as posted on my blog: 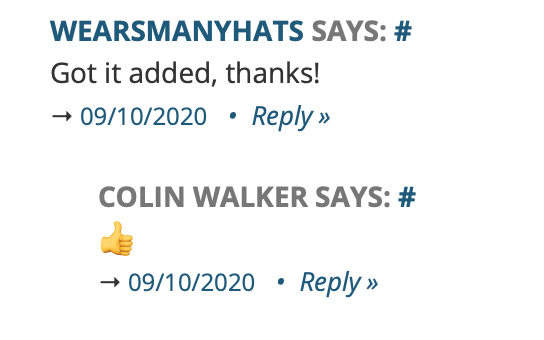 And here it is in situ on micro.blog: 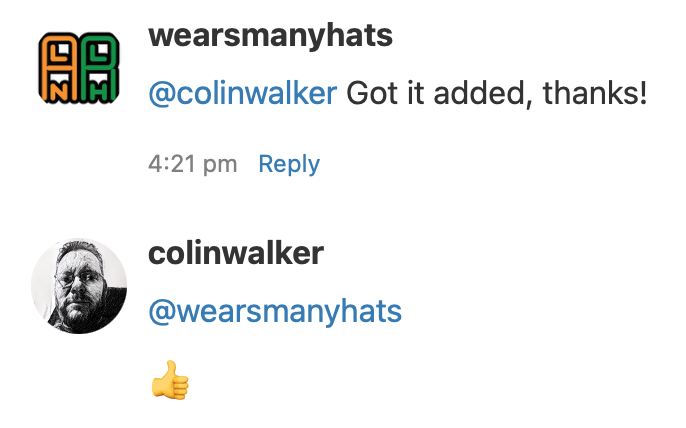 I didn't think that the external webmention auto-added the person's @name that you were replying to which is why I always went back to micro.blog. Is that an improvement in v2.0 or am I just remembering it wrong? In any event, that this works properly means that I can always do so directly from the blog which will make replies more obvious.

@colinwalker as a learning challenge I'm building from scratch a microblog in expressjs. I've been trying to find good resources for how to connect up with micropub and webmention and integrate that all in to micro.blog. Do you know any good resources or guide along these lines??

@hooper You'd be best off asking over in the Indieweb channels - they're on IRC or Slack - I've always used Slack myself.

@colinwalker that's a great tip. Hadn't picked up on the slack channel. Will check it out. Thanks.

# Sadly, replies to external webmentions on micro.blog aren't handled as threaded comments when they get back to WordPress, they just show as mentions as they do not reference the comment they are replying to.

I may be able to implement a semi-workaround to the threaded comments issue by checking the source of the webmention and changing the type from "mention" to "reply" if it comes from micro.blog but will have to look at not also catching genuine mentions. That's a little project for later.