# A year ago today I wrote my "morning after" thoughts about the iPhone 7 reveal.

Overall, I was happy with the phone (especially the dual camera in the 7 Plus) and that it was the same design for the third year didn't bother me.

Being on a contract that allowed me to upgrade with no penalties after 12 months, I fully intended to get the 7 Plus but the initial availability problems dragged on.

So it never happened!

By the time the model and colour I wanted were available via my carrier I wasn't in a rush to upgrade any more. Upgrading at this later point would have pushed me further and further behind Apple's release cycle so I decided to just wait for the next one.

The 6S Plus has continued to serve me faithfully and I've not "missed" the newer phone at all.

As my contract ends at the beginning of October I will definitely be upgrading to the 8/X/Edition or whatever it will be called. If the rumoured delays for that model are accurate its availability may just about match my upgrade date.

I just hope they aren't too severe and my carrier can come up with the goods.

# My mobile provider won't let me view the Wayback Machine, one of the most important resources on the web, unless I prove I'm over 18.

It's like Apple rating a web browser as 17+ just because it could be used to view adult content.

That's truly messed up. Who gave them the authority to block sites from you??

I know right! Blatantly adult material I can understand but something like this?

Why we need short form content on our blogs

"When I first started blogging, it felt like the expectation was that blog posts should be about 500 words"

I went back through some posts and found when he started. He's right.

I've been recently thinking about how the web and such expectations have changed and how this affected the way I've blogged over the years.

When I first started properly in 2003 I wasn't really sure what I was doing or what I should be writing about. I just knew I wanted to be one of the "cool kids" and have a presence on the web.

In those days I just used to write a combination of what had been happening, some tech stuff (mainly Microsoft based) and a lot of meta posts as I tried to make SharePoint a viable blogging platform. Unfortunately, the first snapshots of that old blog are from 2004 but they serve as an indication of how things used to be.

After a while, the influence of the "Tech blogs" grew and it became more fashionable to write longer posts. Bloggers were no longer the stereotypical losers writing about their lunch and their pets - the line between blogging and journalism started to blur.

In my pre/early internet days I had written a number of letters and pieces which were published in few a different magazines; writing in a more journalistic style, therefore appealed to me but, as Chris says, the expectation became that blog posts should be 500 plus words.

Over the course of a few years blogging became less about being a representation of you on the web and more about think pieces and essays, everyone trying to one up each other with a hot take on even the smallest story.

Shorter posts disappeared from all but the most ardent of personal sites instead moving to the ever growing social networks and an era ended.

I was as guilty as anyone, a move I often regret.

Social networks were a brave new world, a movement that was going to change the world for the better but they needed money to survive and business models sadly replaced noble ideals despite all protestations to the opposite.

But that's an argument for a different day. It's just ironic that what helped destroy short form blogging became its replacement.

Constantly writing more than 500 words is hard, very hard. I had enough trouble writing 300 words a day for a year during my write365 project. I burnt out.

And this is also why many others no longer blog. Once shorter posts became almost taboo they lost much of their material. The effort required to blog on a regular basis became too great. It was far easier to throw out a tweet, a dozen, a hundred, and still feel productive with minimal effort.

But the return to indie blogging is growing in momentum. As Manton writes: "By taking microblogging back from Twitter, we create a natural place for traditional blogs to grow." While he states that "microblogging is the gateway drug for long-form content" we must not treat it as merely a stepping stone only to be discarded when the high is no longer enough.

We already made that mistake once. We need both!

@colinwalker Lol but to me there's a difference, there are short-form blog posts, and long-form ones. The short form ones might just be a little over a tweet, and the long-form ones can be thousands of words.

@hope Exactly, and we need both!

@colinwalker Yeah, you're definitely right about that.

@colinwalker reminds me my first, short lived blog consisted of very short posts. Still online but no idea if I could still post.

Thanks for reading and linking to my post, Colin!

"Over the course of a few years blogging became less about being a representation of you on the web and more about think pieces and essays,"

Yes, and it became very commercialised and formulaic. Thought leaders, content marketing, and all that. It's refreshing to see the resurgence of personal blogs and a bit of experimentation again.

Yes, it is, and that's why I'm enjoying writing a lot of short posts again. :)

This Article was mentioned on chrislovietyler.nz

Manuel wrote a post outlining why he's failed at blogging in the past (his words) and it really resonates. A big part of it is the pressure he has put himself under including the desire to write in a more journalistic style, as I previously mentioned, and there is always the issue of just trying to be perfect. But he also mentions a couple of other reasons:

he's always been a tinkerer, and there's always another pet project

Depending on the type of blog you are writing these two need not actually be barriers to blogging. It's true, we can spend incredible amounts of time coding and styling and tweaking, and this can often happen in lieu of writing. Perhaps we can justify to ourselves that we need our site to be perfect before pushing our thoughts to it but, if you're anything like me, you're never completely happy. Other pet projects can also get in the way and, after all, we only have so much time in the day and, the more we do, something has to slip. But, both of these can actually be good sources for blogging as you can write up your thoughts and progress as you go which, by their very nature, are definitely not in perfect territory. But that's not for everyone.

# I think the blue behemoth is trying to tell me something... 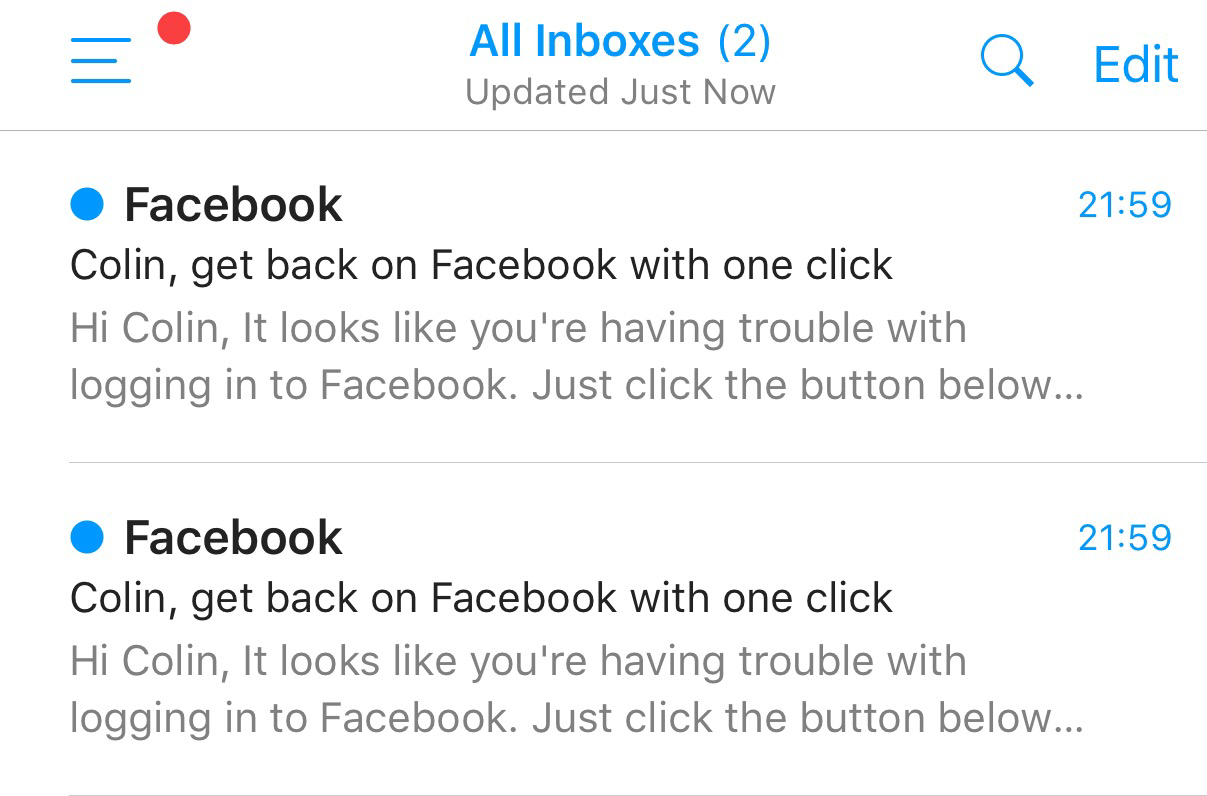 But it wasn't me!

I've had two or three Facebook accounts (all for about 5 minutes, because I could never stomach continuing with it). A while back, I tried to delete them but couldn't delete one because it was attached to a business page. Although I deactivated it, it still appears near the top of Google results if you search for my name. And I'm still getting email notifications after having unsubscribed from them multiple times and sending Google messages telling them in no uncertain terms that I didn't want the account or the notifications anymore. That combined with their use of dark patterns in their design and their use of data have left me with a very low opinion of that company/network.