# Still tweaking the Today view with specific attention to when there are no posts yet for the day. I originally considered redirecting to the 'all posts' view but want to avoid script. 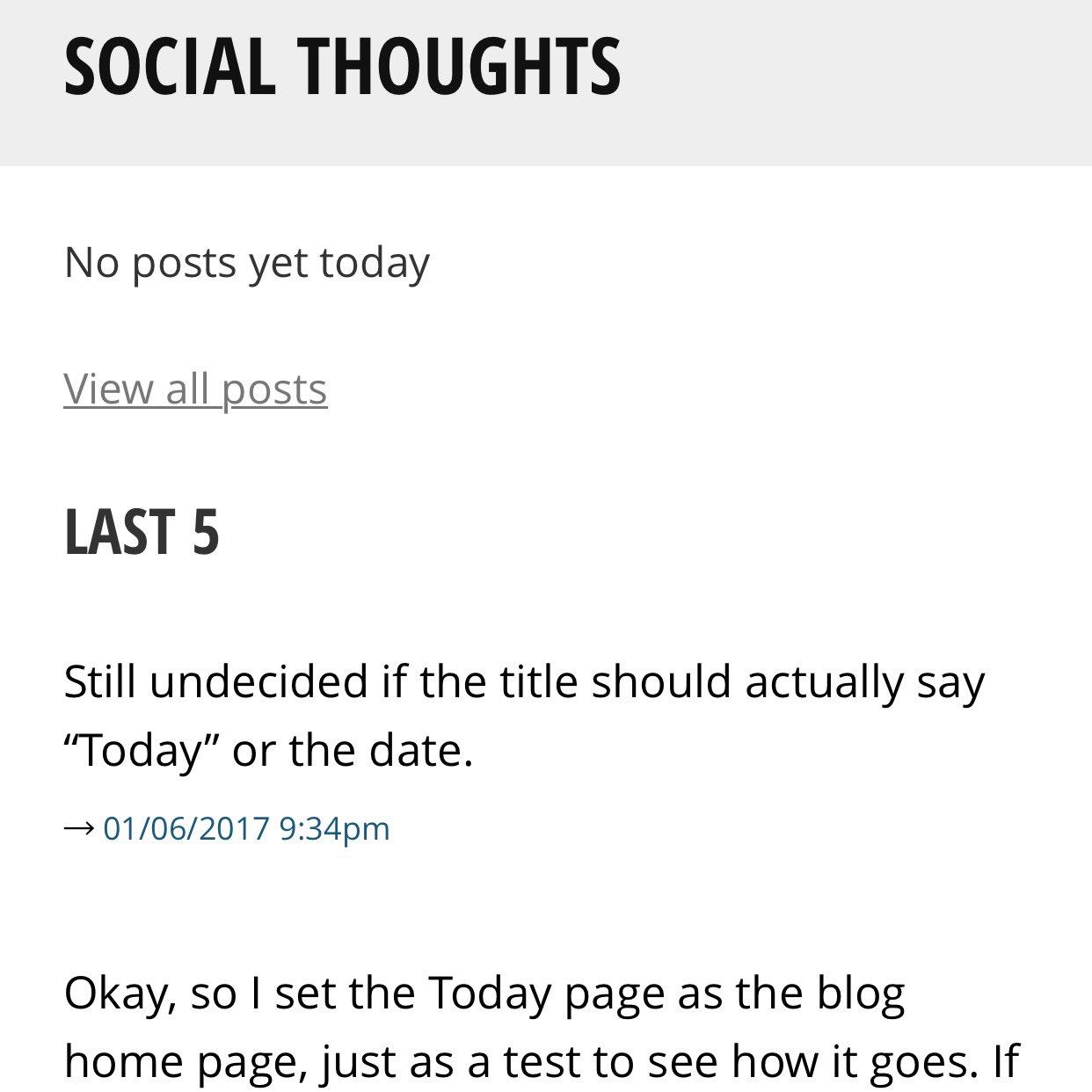 @colinwalker interesting idea. I was wondering about the 'days without posts'?

# A couple of weeks ago I realised it was almost the 6 month anniversary (I'm not entirely sure that's the appropriate word) of my decision to stop using Twitter.

I had imagined I would do a post with my thoughts and make a big thing of it but, as it turned out, the occasion (yesterday) completely passed me by.

Perhaps that says it all.

# The topic du jour appears to be Facebook bashing in expletive riddled posts. The social behemoth stands accused of being anti the open web.

I'm not one to disagree but the network is not solely at fault.

Why do people gravitate to social media? Because it is so simple, you just sign up, log in and post - that's it. People don't want to have to install and configure things beyond an app, even updates are installed automatically on our devices.

Add in the network effect of so many people having accounts and it seems almost stupid to go anywhere else. Why hunt across the web for people's sites and manage feeds etc. when it is all (I know, that's a sore point because of algorithms) right in front of you.

The sad thing is that most don't care about the open web or about content longevity. Ephemera has taken over because most aren't creating anything that needs to be retained beyond the context of the current conversation.

The tools for creating content on the open web are often too hard, too confusing or just not relevant for what most want to do. For casual creators it's easy to see the appeal of places like Medium, they have everything they need in a simple package - no messing around with themes or plugins.

And it's understandable, as much as some will hate to admit, why people will want to use social properties like Facebook as their 'blogs' - it's where they already spend their time and where their network is. Why go elsewhere.

I totally support the open web, and no longer use any of the major social networks, but can't help feel that cutting them off only serves to further entrench their silo status.

And it wont hurt them!

I get that people don't want to link to items that may not be publicly available in the future but that's unfortunately the nature of the web, even the open web.

Sites die, content gets moved or removed, links break, even with the best will in the world.

We just have to move on.

Lots of discussion this week around Facebook vs the Open Web. Colin Walker:

The sad thing is that most don’t care about the open web or about content longevity.

Ephemera has taken over because most aren’t creating anything that needs to be retained beyond the context of the current conversation.

Much of Facebook is useless chit chat that no one will miss when it’s gone. Still, I believe it is a mistake to think that we already know what should be retained for future generations. And in Facebook’s case, nothing is retained for future generations. Of course we don’t need everything, but there are too many babies being thrown out with all that bathwater; deliberately, unnecessarily, and for the wrong reasons. Many will just move on, but I intend to keep helping people care about the open web and its preservation, even if it sometimes feels like a lost cause. Ref: Gruber, Winer, Hewitt.

I never actually considered Twitter to be a microblogging platform, at least not for my own purposes. At its most basic level your Twitter profile fits that brief (a reverse chronological list of short posts from a single author) but the lack of true ownership and the overarching social aspect meant I could never really see it as such. It just never felt like a blog, even a micro one. A new way Micro.blog seeks to usher in a new era for microblogging but if there wasn’t the self-hosted option I feel it would suffer in the same way. If everything was just hosted on the platform then you would essentially have just another Twitter clone. But it’s not, the idea behind it is wider reaching. However, that still doesn’t mean there aren’t issues. I think Micro.blog’s one problem is that it has multiple use cases and, because of this, some don’t really understand exactly what it is. The description on its About page includes:

“Micro.blog shows recent posts from sites and people you are following”

Fair enough, it’s an aggregator, but we also have:

“Micro.blog is a new social network for independent microblogs”

Two use cases within the first couple of lines but they are not incompatible – remember FriendFeed? Later, the description expands and clarifies this position:

“Instead of trying to be a full social network, Micro.blog is a thin layer that glues the open web together, making it more useful. Micro.blog adds discovery and conversations on top of previously unconnected blog posts.”

Now we’re getting somewhere; this is where it starts to get interesting and is what really appeals to me on a visceral level. But people have a hard time understanding “layers” – we only need to go back to Google+ to see this. It was never meant to be just a social network, it was supposed to be the glue that bound all of your Google activity together. Just like Google+ some can only see Micro.blog as a social network, they don’t understand why it is needed, why they should participate or the relationship with content on your own site. As I mentioned yesterday, many just don’t see the need. Add hosted microblogging to the mix and some are confused about Micro.blog’s purpose. Surely, if microblogs are hosted then they are not independent as mentioned above. Connected Whether you get the purpose of Micro.blog or not, blogs themselves are more valuable, more powerful when they are connected, when there is an exchange of ideas. I go on about having conversations via blog posts as I feel this is an important part of the web – how it used to be and how it should be again. But Micro.blog can’t do this alone which is why it sits squarely atop the principles of the #indieweb and why so much emphasis is placed on webmentions. The hope is that as Micro.blog grows, the proliferation of webmentions will drive the adoption of ways to consume them across different blogging platforms, in turn driving wider adoption of the indieweb as a whole. As I have also written, I hope that microblogging may spawn a resurgence in longer form writing – especially on people’s own sites. If a mechanism exists to reduce the isolation of blogging then more may be tempted to share their thoughts in more depth. The indieweb provides such a mechanism but the technology and terminology are beyond many. Micro.blog has the advantage of using a familiar trope (the social network) to introduce this mechanism and its concepts in a more accessible way. It just needs to better explain what it is and how its different use cases relate. It just needs to better explain why.

A good response from Jack and an excellent stance to take.