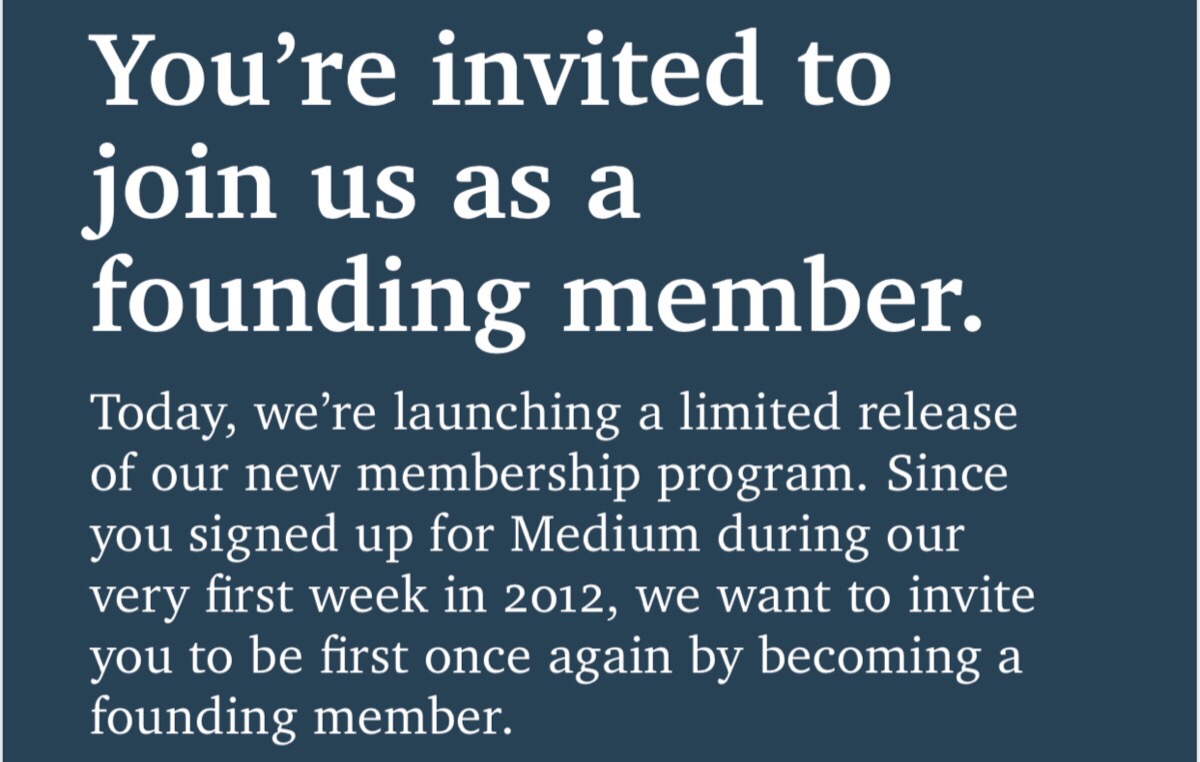 Along with a number of others, last night I received an email from Ev Williams personally inviting me to become a "founding member" of Medium having been a founding user back in 2012.

I remember the launch and the excitement I felt over this new, clean blogging platform and practically begged for an account on Twitter.

I received an invite very shortly after (Medium was still invite only in those early days) but, for some reason, I didn't post my first piece there until November, three months later.

What is, perhaps, not so surprising is that it then took me until March 2015 to start using Medium regularly. I was unhappy with my writing and stopped using my actual blog in 2013 while I looked for a new creative outlet and inspiration.

I think this chequered history with Medium has had a knock-on effect and I have to admit that I am conflicted about the Medium membership program.

In his introductory post, Ev is right on the mark when he says that "media is broken" and a new course needs to be charted.

Ad supported business models are not sustainable, especially when Facebook and Google have essentially cornered the market, and only serve to encourage the wrong behaviour in a desperate scramble for page views.

Something needs to change.

The value I have been getting from Medium has reduced over time and this frustrates me.

This is what happens on Facebook as I only use it once every few months to look at a post in a family group. The endless stream of "do you know..." suggestions with people from far-flung, foreign climes (as Facebook tries to search for something useful) is amusing but perfectly illustrates that algorithms are only as good as the data they are fed.

Maybe the Medium algorithm itself has changed and places incorrect weightings on the items or authors I read meaning I get the wrong balance of content.

Medium sent me a "you're in our top 10% of readers" email at the end of last year but, despite my time at the site and in the app, it's as though the algorithm still can't work me out.

It didn't seem too difficult to get in that top 10% - I didn't think I was that heavy a user which tells me there are a lot of people spending hardly any time on the platform.

This has to be worrying for Ev and his staff.

The "new experience is still under development" and without a meaningful demonstration of how this new Medium experience may finally work it's difficult to justify paying with no guarantee of any increase in value.

As others have already said, what Medium seems to value as content doesn't necessarily equate with what readers consider worth their time; and now money.

Maybe they are hoping for that "new shiny" effect to encourage sign-ups.

It may seem petty to quibble over $5 a month (or £4.99 in the UK) but multiple "it's only" amounts soon add up and we have to prioritise where our money is spent.

Returning to my point about ensuring I have quality input I am keen for any system to provide more signal than noise. Medium is considerably better in this regard than Twitter but has, of late, been sliding down a very slippery slope.

This is the curse of popularity; as services grow and expand they become the playground of those used to engaging in that wrong behaviour mentioned earlier.

Bit, just like Twitter, I sincerely hope it can resolves its problems and arrive at a business model that works for everyone: Medium itself, readers and those contributing their work.

One sentence from Ev's post that offers some hope refers to those:

If this is an indication we will be spared the clickbait, listicles and endless, recycled self-help articles then maybe membership may be worth it.

If not, we can always cancel.

# Apple's acquisition of Workflow is a very interesting move with great potential should Apple invest in the possibilities. Imagine a version of iOS where intra-app connections are directly exposed and actions can be chained.
Hello
Start Here
Blog
OTD
NOW
ebook
Reader
Join me