Explore and Discover: an evolution five years in the making

After publishing yesterday's post news emerged that Twitter is testing a new "Explore" tab in its apps to replace and build upon Moments and existing means of content discovery.

According to the piece over at Mashable the Explore tab will be a mixture of search, trending topics and Moments harkening back to the Discover tab which preceded Moments.

Now that Jack Dorsey has settled on Twitter's role in the world getting good content in front of people is of paramount importance and it is good to see continued efforts in making this happen.

In fact, the whole strategy depends on it.

However, I have two initial concerns over the Explore tab as reported:

Moments has recently passed its first birthday and the ability to make Moments has just been opened to everyone. In my opinion it's been a revelation and one of the best features Twitter has launched in some time. I hope Explore doesn't detract from what Moments has achieved; it seems a backward step to lessen its presence just as it is becoming a fully fledged feature.

As Explore will be presenting a range of information it will need to be both well structured and useful. The current Moments tab is visually appealing with effective presentation and ease of use.

Combining multiple sources of data in one area means that each has less immediate exposure. The screenshots shared by Mashable (below) do not, in my view, show an overly useful or useable approach. 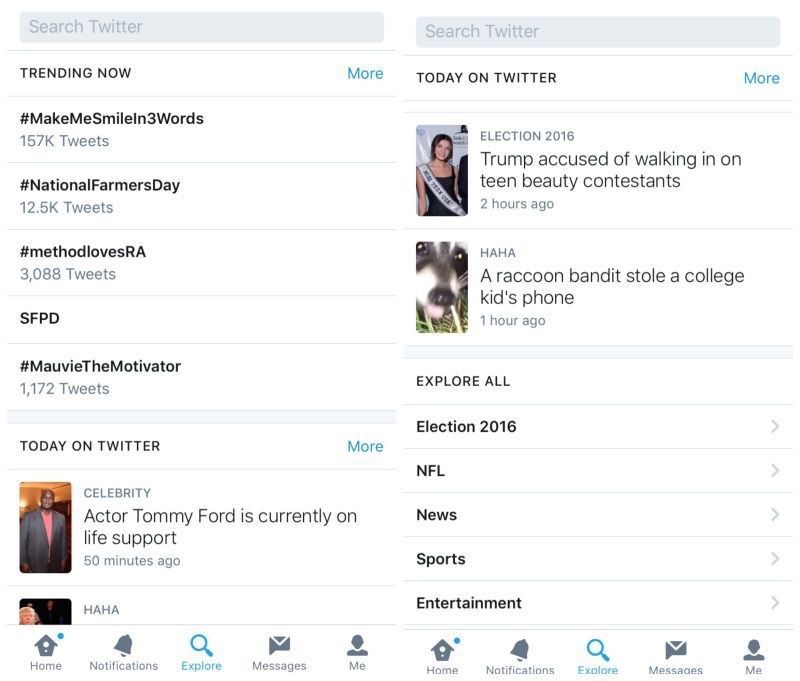 If handled properly, however, the Explore tab could be a good thing and we could be on the cusp of a new, focused product drive.

What took so long?

I wrote back in 2011 that Twitter should iterate the Discover tab and make it the default view for new users. The Explore tab, if done right, seems like it could such an iteration.

I still maintain that it should be the first thing new users see and, by extension, the new face of the "logged out" homepage.

It's frustrating that I, amongst others, have been writing about this for so long but it is only now that Twitter seems to have caught up.

"Everything points towards Twitter placing a much greater emphasis on its identity as a news and media network with the movement away from the main stream as the focal point."

"Could Twitter actually become a place where we consume news first and talk about it after? Is this too radical a shift from the service we all know and love or is it a logical conclusion based on recent events?"

These could have been written any time within the past few months considering Twitter's media partnerships and the new direction. But no, they were written over four years ago but the network appeared to stagnate meaning we are only just seeing this come to fruition.

Twitter's problem has been that it never knew exactly what it was; there were various ideas and concepts but it seemed to see-saw between strategies.

On his return Dorsey may have been regarded as having the necessary authority that comes from being a founder to right the ship and set the product direction, but you cannot plot a course without having a destination.

Instead, he has defined (maybe we could say admitted or finally accepted) the company identity so that the corporate vision is now in line with public expectation.

Rather than setting any particular product goals this may be his greatest gift to Twitter since his return.