So, what is social influence exactly?

With the discussion firmly rooted on how to gauge and measure social influence we need to take a step back and look at the concept of influence itself. What exactly is it, how does it occur and how does online influence differ to offline?

What are the "offline" definitions of social influence, how do they relate to the online experience and do we need to expand the definition for the age of the social web? 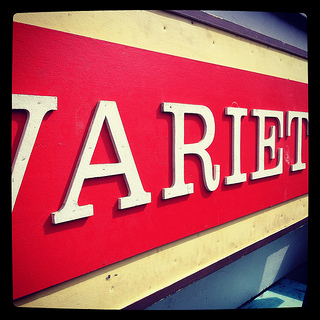 Compliance is a state of artificial influence and is described as a change in behaviour but not attitude - it is often referred to as submission as we may need to comply without necessarily agreeing with the issue at hand but feel the need to act in the way expected of us due to societal pressures.

Identification has its roots in the work of Sigmund Freud and, in its simplest form, is a behavioural change as a result of an emotional attachment to something or someone. We adopt the behaviour of those we like or respect, be they existing connections or those we would like to know or emulate. Celebrity advertising relies on this concept.

Internalisation is the complete adoption of behaviour and attitude and will normally occur when these are in accordance with our existing moral values or beliefs. It is far easier to influence those who already think or act in similar ways as there is minimal shift in mindset. 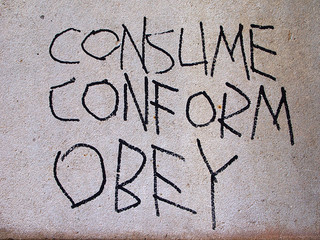 The need to Conform

Compliance and identification are viewed in some fields as different components of Conformity - the need to modify behaviour and/or attitude in order to fit in with a group.

Virality on social networks can be a direct result of normative conformity with users wishing to be seen as cool by contributing to the spread of the latest meme.

Informational conformity, otherwise known as social proof, is a change to reflect what is seen as the correct behaviour for a situation due to the assumption that the influencers have more knowledge and experience of that situation so know how to respond - even if that assumption is incorrect. The belief that behaviour is correct can also result in an attitudinal shift giving rise to internalisation.

Behaviour on social networks is frequently affected by informational conformity as social media "experts" espouse notions of correct procedure such as when to tweet or the length of the ideal blog post.

Informational conformity can ultimately lead to a state of self-fulfilling prophecy when the proposed behaviour and attitude are so prevalent that they become the de facto standard.

Social impact theory, created by the social psychologist Bibb Latané, states that the impact of social influence is a function of its:

The theory uses mathematical equations to calculate impact (so cannot directly account for the humanising aspects of influence) but we can relate it to the concepts suggested for the definition of social gravity.

Immediacy (proximity or distance) and number (size of the influencing group) are the traditional gravity elements while strength can be interpreted as the more human elements, outlined as reputation, relevance and value.

The larger the influencing group, the closer it is both within the structure of the network and in terms of current behaviour and attitude, and the greater the reputation and relevance then the more persuasive it will be.

Influence on social networks shares some similarities to that described in the social sciences but is distinct from its offline counterpart as there is a much larger gap between affecting behaviour and attitude.

Much of what is deemed influence on the social web is actually minor activity rather than a behavioural or attitudinal shift. While there is the potential for compliance, identification and internalisation to occur, social networks have introduced a new variety of influence: acknowledgement. 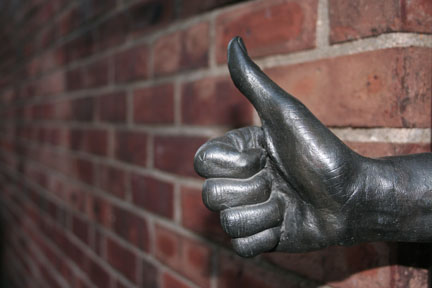 Acknowledgement is the quick hat tip, the Like or +1 to say "I've seen it, thanks". The implication is that acknowledgement is positive behaviour due to the language involved (liking) but there is no guarantee of actual behavioural influence or, indeed, any lasting impact.

There is no satisfactory offline equivalent to these actions apart from a quick thumbs up but this is strictly "in the moment".

As influence measurement on the social web is both incredibly difficult and limited in scope it places far greater importance on acts of acknowledgement as they are a permanent record despite, in many cases, being a throwaway action.

The phenomenon of acknowledgement is a double-edged sword in that it allows us to give or receive these quick messages of approval - it is nice to say thank you or to feel your efforts have been appreciated - but it also ambiguous and, often, a lazy alternative to something more meaningful.

The goal of influence is to affect the attitude or behaviour of others (ideally both) so as to reinforce the position or opinion of the influencer.

True influence occurs when an idea is accepted and internalised but this is difficult to achieve. Consequently, the degree of influence will often slide from internalisation through identification and compliance to the lowest common denominator, acknowledgement, as the impact of influence decreases.

The very existence of social media has been influential in modifying our behaviour with arguments that the status update culture and visual web are shortening attention spans and reducing focus; perhaps we could say that this, in itself, is a negative aspect of conformity and compliance and a barrier to achieving social influence.

Social influence is when the community and society both affects you and your belief.

So, what is social influence exactly? | Socialtacular says:

Well thought out and well argued.

Indeed, social networks only catalyze the initial approval of a social influence compliance, while other media such as TV, radio, newspapers and magazines, telephone and coffee talks, among others, help to strengthen the chances of identifying and internalization as part of the ecosystem necessary to develop a strong social influence can sometimes become global. So, I put it on a model developed in 2010: Media Virus 3.0. I share the basic document http://es.scribd.com/doc/123543911/mv3fin