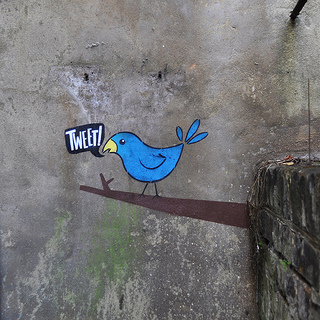 A tweet is just a message posted on Twitter isn't it? A "micro publication". It's not actually that simple.

John Battelle hits on an interesting argument with regards to the "ongoing legal battle with a Manhattan court over the legal status of tweets posted by an Occupy Wall St. protestor": who owns tweets? Battelle's post title says "Tweets belong to the user" but I'm not so sure.

5. Your rights You retain your rights to any Content you submit, post or display on or through the Services. By submitting, posting or displaying Content on or through the Services, you grant us a worldwide, non-exclusive, royalty-free license (with the right to sublicense) to use, copy, reproduce, process, adapt, modify, publish, transmit, display and distribute such Content in any and all media or distribution methods (now known or later developed). Tip This license is you authorizing us to make your Tweets available to the rest of the world and to let others do the same.

A confusing state ensues. The actual term relates to "submitting, posting or displaying Content" but the subsequent tip references "your tweets".

Is this, in effect, saying that content and tweet are synonymous? I would argue it is poorly worded and the situation is actually more complex.

The sum of its parts

What is the legal definition of a tweet and who really owns what? Do we just own the words?

While we can re-use the content of our tweets elsewhere, because of the non-exclusive rights granted by the ToS, is there a legal separation between the content and the "tweet" that surrounds it?

By this thinking, a "tweet" is a separate entity and this is this how Twitter can justify controlling the appearance of tweets when displayed externally via the API? We are exporting the tweet as a whole rather than just the content.

Twitter is effectively stating that it doesn't mind our content appearing externally but not the specific entity which is the tweet - unless, of course, it is displayed in the correct format.

As Battelle says, what are the implications should people:

want to extract some or all their tweets, and perhaps license them to others as well. Or, they may want to use a meta-service (there’s that idea again) which allows them to mix and mash their tweets in various ways, and into any number of different containers

It has been often asked why, after 6 years, is there no ability to export our content. This is seen as a major failing with a supposedly "open" system in these times of data portability.

Even if we could export the data, however, its value may be reduced because it now has no context. Any tweet that was part of a conversation would be isolated; would we then be legally permitted to link back to the conversation, reassociating our content with its host tweet thus restoring the context?

Where do we draw the line?

For Twitter to reconcile our right to content ownership with the ability to restrict the way tweets are reproduced via the API I would argue that the tweet must be defined as a wrapper around the content we provide and, consequently, is not created by us but by the service itself when our content is presented in Twitter's standard format.