Are we seeing a fundamental shift in the way Facebook wants us to interact with our friends and who those friends should be? 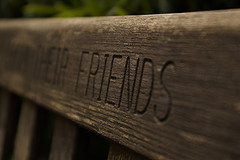 Facebook is changing and has been for some time. Individual features are always in flux but we have recently been seeing a subtle but fundamental shift.

Despite joining Facebook in 2007 I'm almost never there as it doesn't really fit the way I use social. I'll be the first to admit that, offline, I don't have many that I would really consider as "friends" so, seeing Facebook as for a specific purpose, I have not added hundreds of online acquaintances like so many others.

Just as I said that LinkedIn had lost its focus Facebook has become a victim of its own success and, consequently, morphed from its original purpose.

Do I know you?

We know Dunbar's number - the commonly proposed 150 person limit on how many actual friends we can realistically handle without any form of restriction upon those relationships - but seek to call ever greater numbers to our banner. Social is, and has always been, an online popularity contest for many which is why we now have influence rating and hosts of "top ten" or suggested user lists.

As Facebook grows and seeks to further monetize via its advertising model it is obviously not in the service's interest for its users to adhere to Dunbar.

As I have said previously relationships are the real social currency, the interactions we have with each other and how this defines us as both individuals and a collective group. The more connections we cultivate the more data sites like Facebook can gather and the more effective it can be at pattern recognition.

So, how do we rationalise the service's need for us to maintain large numbers of connections with our own apparent desire to focus on more tight-knit social circles?

When subscriptions were first introduced I called them "Fan pages for the masses" as they provide the ability to follow anyone's updates without the need to be a friend so long as they have them enabled. Some also felt that Subscriptions could do away with Pages altogether as there would be little need of them for many.

While it could be argued that, with Subscriptions, Facebook merely recognises that we sometimes want to follow non-friends I asked if adding this unilateral method of following was conforming to the social norm?

Being able to fill our feeds with the updates of those we don't know makes the next logical step a re-evaluation of those we have marked as "friends". The practice of unfollowing has been around for as long as social itself but, now that we are faced with more networks and more demands for our time, it has become a popular undertaking. As people downsize their social graphs so the signals they generate are reduced which is bad news for host service.

Social is no longer just about friends and that is where Facebook tries to reach a compromise with its new tool for suggesting "Acquaintances" sitting alongside Subscriptions in helping to shape our relationships and distinguish between them.

The Acquaintances list appeared on Facebook last year but had to be populated manually. The functionality now exists for the service itself to automatically suggest who it thinks is not a close friend and, as such, whose updates you might to want to see that much of.

The term "friending" has lost meaning and merely come to mean "mutual following" but it is not in Facebook's interests for us to unfollow others as those relationships, no matter how casual, are then lost and the social graph is weakened.

By enabling us to indicate our strongest ties and closest relationships Facebook can create a better model of our influence and the influence of others upon us. We will care more about the opinions and recommendations of family and close friends so we can be better targeted by ads that are more likely to be relevant based on our connections with others.

The combination of subscriptions and the acquaintances list lets Facebook gauge our interests and behaviour from opposite poles. On the one hand, it is allowing us to increase our connections without the overhead of friending but, on the other, we are then being encouraged to focus on those that mean the most to us; a clever move disguised as making our time more rewarding.

Facebook is changing and will continue to do so in order to better serve the needs of the company. Those needs will often coincide with those of the user but, ultimately, those shares aren't going to grow themselves after IPO.