Embracing its simplicity may be Twitter's master stroke.

Social networks are becoming ever more complex with increasingly sophisticated methods of grouping and sharing in a bid to gain and retain users but, is this always necessary or the right direction to take?

Twitter grew from an SMS application and ever since has stuck to its roots and refused to abandon the option to communicate on the web using the humble text message. The short, sharp status updates of only 140 characters, while sometimes a bit limiting, are the perfect antithesis of the more verbose Facebook and Google+. 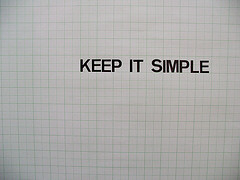 The simplicity of Twitter is the key attraction; the speed with which you can scan through a lot of information coupled with the absolute ease of access - there is virtually no barrier to entry - means there is no reason why anyone can't send a tweet from just about anywhere.

This simplicity, ease and speed are what make it perfect for real-time news coverage and instant reaction to events.

I have written in the past of additional functionality that I would like to see within the current interface - most specifically a form of topic or event based channels - but the news that Twitter is planning to simplify its interface and standardise it across the multiple means of access (web, mobile app, etc.) is quite refreshing and shows that, yet again, the service is keen to honour its beginnings and resist the temptation to force competition with those it is not directly comparable with.

The figures released by Dick Costolo showing that only 50% of Twitter's 200 million accounts are live - 40% of which don't actually tweet - illustrate that Twitter needs to get back on track and recover some of its lost momentum. The initial explosion in user adoption was, no doubt, due in part to this very simplicity but an abundance of feature additions and the #newtwitter interface placed additional barriers in the way of easy use.

Fred Wilson points out that the number of accounts - and subsequently active users (those who have actually logged in) - is misleading as Twitter, unlike Facebook, allows visitors to view content without being logged in or even having an account. The actual potential "customer" base is, therefore much higher and taking steps to ensure that all customers (active or otherwise) can find relevant content will be of benefit.

The reported 400 million unique visits to twitter.com will, however, include those who may visit the homepage and immediately leave as there is no obvious way to interact without signing in or creating an account so we must be careful not to assume that this high figure translates into actual "users".

While the ratio of creators to curators to consumers may be incredibly bottom heavy for content such as blog posts and videos I would argue that with status updates it could be considerably more evenly spread. This was the case in Twitter's earlier years and moves to simplify the service may encourage some of the logged out users to log in again and, perhaps, the casual viewer to even create an account.

It is undeniable that a logged in user is far more valuable to Twitter as the business model will include more targeted ad campaigns but the logged out or casual user must not be ignored as it is in Twitter's interests to encourage them to become active.