Standing at the crossroads, world spinning round and round Know which way I'm going, you can't bring me down - Ozzy Osbourne 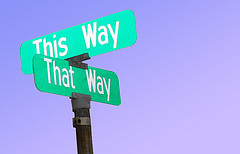 Change is inevitable in order for things to progress. We have an irrational fear of change but must accept it, often realising the benefits once it has happened. We are creatures of habit and anything that disrupts the status quo is unsettling - we need, however, to upset the apple cart and shake things up in order to move on rather than getting stuck in a rut.

A recent theme has emerged: that Twitter needs a new vision, a new direction.

From the outside it seems as though Twitter is standing at the crossroads wondering which way to turn, what changes to make for the best and who it is going to upset on the way.

Rob Diana asked Twitter what it wants to be when it grows up arguing that if needs to focus on product development and work out where it wants to go in order to stay one step ahead of the competition.

Mathew Ingram, over at GigaOm, goes a step further suggesting that Twitter needs "a consistent and tangible vision" under the leadership of a Steve Jobs character.

We have had the rumours that UberMedia is going to build a competitor - possibly using its stable of client applications as leverage - and the new TweetDeck web service (still in beta) is being seen as a rival to #newtwitter but Twitter needs to improve its experience in order to progress, even without the threat of competition.

It has been said UberMedia's network will focus on some of Twitter's failings and gaps in usability to gain traction and I go along with the need to recognise how people are using a service in order to greater facilitate this use.

Twitter has done it before, taking on board the ideas of hashtags and retweets, but it needs to get more creative and take a few risks.

A couple of days ago I had a "Wow!" moment listening to the radio in the car. During an interview, historian Neil Oliver was asked how you could sum up Stonehenge in a sentence or two. His answer: forget the stones, (what?) instead think about why people considered the site to be important enough to want to keep coming back and permanently mark it in this way. Why is the site important?

How does this apply to Twitter? Forget the tools, forget specific functionality, think about why people are using the service - why do they think it is important.

It's almost like it has been ripped straight from the intro to the Cluetrain Manifesto:

"What if the real attraction of the Internet is not its cutting-edge bells and whistles, its jazzy interface or any of the advanced technology that underlies its pipes and wires? What if, instead, the attraction is an atavistic throwback to the prehistoric human fascination with telling tales?" "In sharp contrast to the alienation wrought by homogenized broadcast media, sterilized mass "culture," and the enforced anonymity of bureaucratic organizations, the Internet connected people to each other and provided a space in which the human voice would be rapidly rediscovered."

Read Twitter for "the internet" in these paragraphs and you have a good basis for realising the attraction for what is, essentially, a very basic service.

If Twitter is going to look at how we use it then a few trends may be instantly identified but it has to prove it is listening.

There is obviously a willingness to eat in to the ecosystem when it suits, and to undercut developers, but Twitter needs to start doing it better than the third parties rather than doing just enough to get by.

The beauty of Twitter, however, is in its simplicity - change the game too drastically and you run the risk of losing what you've got. It's hard to think what Twitter could do that would be big enough to be a game changer again but without destroying the success achieved so far.

The question then becomes does Twitter know which way it's going? Will it slip up allowing others to bring it down? Or, perhaps, it will take the time to rethink its direction to ensure it is on the right path. ﻿ Image by Lori Greig