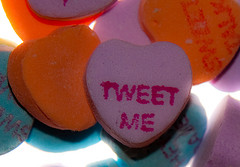 While I personally think that Twitter should not expand to beyond 140 characters I wanted to take a more balanced approach and take a wider look at the issue.

One thing is for certain, something that polarizes opinion can often be good as it generates interest and reopens discussion so that all avenues can be explored. One such thing is the debate over the 140 character limit in Twitter reignited by TweetDecks decision to launch the deck.ly platform.

Naturally, people are asking is it time for Twitter to dispense with the 140 character limit or should the cornerstone of the microblogging service remain sacrosanct?

Twitter was originally designed for use via sms so, allowing for the space taken up by the username, the character limit was a necessity. Things have moved on apace with the service being accessed via the web and host of third party clients. While mobile usage has rocketed only a fraction of that would be in the form of messages sent via SMS.

So, how many use SMS for twitter? I use it for notifications about a couple of accounts I follow and for mentions/dm's but how many still use it for tweeting or consuming tweets? Probably not many in the grand scheme of things but the chances are that those who do aren't using Smartphones or don't have decent data plans such as 'Pay As You Go' customers.

We have had the ability to tweet more than 140 characters for quite some time thanks to services such as TwitLonger but, while its advocates have been calling for its support in just about every third party Twitter client going, the truth is that tweeting more than 140 characters has been viewed largely as a fringe activity despite being supported by many Twitter clients. That is until a major client, TweetDeck, has now decided to launch its own integrated platform for the same ends.

Although TweetDeck (on certain platforms) can natively view items from Deck.ly, the thing all longer tweeting platforms have in common, by necessity, is that the excess characters must be viewed externally from Twitter by following a link as there is no one size fits all solution - fine for those of us on a fixed connection or a smartphone but not for those on a dumbphone who aren't able to follow those links.

Some think it is inevitable that Twitter will have to go beyond the 140 character limit  in order to further evolve and grow but it seems to have been doing a good enough job already with the limitation in place. The argument that "there's no reason for Twitter to be constrained anymore" would cut out a whole section of users in one fell swoop and Twitter have always maintained that retaining SMS support is a priority. The cause is, however, helped when the official Twitter app for iPhone (which used to be Tweetie) includes TwitLonger support.

#newtwitter gave us the right hand pane for the inline viewing of images and videos amongst other things so, as suggested by Dave Winer, the only way to go would be for the likes of TwitLonger and Deck.ly to open up with APIs that allow the longer posts to be consumed elsewhere. This would allow Twitter to display the full tweet in the media pane whilst retaining the short version in the timeline but, as TweetDeck admit, they are competing with Twitter - both the web site and their own apps - so would it be wise to give Twitter direct access to this data, especially as Deck.ly is also viewed as a platform for generating ad revenue?

With the banning of UberTwitter (now UberSocial) and Twidroyd for various policy violations Twitter has shown that it can play hard ball when it comes to policing its service and ecosystem but removing the ability to post tweets longer than 140 characters would upset a lot more people than temporarily blocking a couple of applications. Twitter itself has set a precedent with the continued support for TwitLonger making it harder to remove the functionality without being completely hypocritical.

It is not inevitable for Twitter to support long tweets but it may be inevitable for the site to support those tweets should the services that allow their creation open up to the mother ship. Twitter has come a long way from its simple beginnings and at the outset many would not have thought that the ecosystem surrounding it would not have grown to its current size and even those that rebelled against the likes of Twitpic.

Denying the ability to link to text longer than Twitters inbuilt limit is unrealistic but what is realistic is for us to realise that Twitter cannot include the ability to natively create long tweets without completely losing its sense of identity.

The joy of Twitter is in its simplicity and this is what resonates with the public. 140 characters forces us to think about what we are saying and there are other places for longer text such as Facebook and blogs. Occasionally, people may want to say just a little extra to their followers without resorting to full blog post but this does not mean that they will be persistently making long tweets on a regular basis.

To be fair to TwitLonger their site even asks you not to "get lazy with Twitter" and if your Tweet runs to 150 characters "you can almost certainly reword it to get it to fit". We just have to be sensible.