Is the social web becoming too developer-centric? 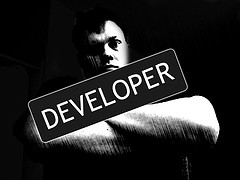 Where does a network's responsibilities lie? Should it be looking after the interests of users or giving developers what they want an ever expanding playground.

The advancement of the Semantic web has taken a great leap forward with the recent announcements from the two major social networks: Facebook & Twitter. Facebook have controversially released the open graph and Twitter have annotated tweets which should be rolled out in the not too distant future.

What both of these have in common is that they are essentially geared geared towards developers; the open graph allows developers to extract data about Facebook users and their networks and annotated tweets allow for developers to build in to their client applications ways to add additional metadata to individual tweets. Both systems were announced at developer conferences with little information supplied to the end user.

Others have comments that Twitter are leaving the decision on how to implement annotations up to the developers but this creates the possibility that we will experience walled gardens within a single service with only specific apps able to access some of the data. Surely, Twitter should enforce a standard or commit the developers to an agreement or they run into a similar problem to Facebook: openness. Non-standardisation will allow client developers to corner their share of the twitter app market; unless they work together to standardise the format of annotations twitter clients could undergo their own Betamax v VHS or HD-DVD v Bluray battle.

Are annotations going to be available via the Twitter web site?

Where does the responsibility lie for development? With the service provider or with the surrounding eco-system? The eco-system can organically grow enhancements but shouldn't the provider choose the main path?

Ultimately, developer input can increase the utility of a service but is the functionality provided by social networks, as far as the end user is concerned, reaching a peak? Do services provide all they need to or do we have a way to go?

How far can social media go and is any new development really providing us with additional functionality or merely providing the user with added convenience - easier access to things you can already do. Twitter, for example, have given us hovercards which we can add to our own sites via @anywhere. They are a nice touch and provide a significant increase in ease of use but they are just providing convenience - there is nothing there that you cannot get elsewhere albeit with a lot more clicks.

The concensus is that the open graph is primarily there to benefit Facebook themselves and then developers who might be collating data but, how much will the end user benefit from annotations or will they, too, just become the plaything of the developer - a means to gather statistics and identify patterns.

Where next for the consumer?

The main networks seem to be intent on empire building whilst forgetting that those empires are built upon us, the user. Whether it be an issue with functionality, data collection or privacy it needs to be remembered that we are the life force which keeps the services running; where will they take us and at what cost?